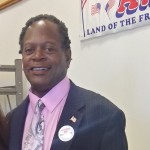 I would like to say thank you to all of the people who voted for me within the 4th Congressional District in a very close race. I would also like to acknowledge the hard work that my counterpart Cindy Werner and her team have done during the campaign. Cindy is a fighter and I respect the effort she made while running. I hope to work with Cindy and her team in the coming weeks and months so that we can win this election. As everyone knows, I am running against Gwen Moore, who has been in Congress since 2005, and from that time to now, I have watched the city of Milwaukee and parts the 4th Congressional District get left behind and forgotten.

My campaign is reaching out to everyday voters to show them that the same people they vote for every year do not always have their best interests in mind. For example, here in Milwaukee, there is lead in our Water. But money is supposed to be allocated from Congress to the State to fix the roads, repair houses, clean our water, and create economic development within the opportunity zones that President Trump has implemented. But these issues are not being appropriately addressed by the local Democrat Politicians. However, in Mr. Roger’s neighborhood, which is my campaign, I a m focusing on the issues that affect this district and this city. Here are a few of the policies I will fight for while in Congress, 1. Clean water, 2. Education for all, 3. Working with Police to solve our problems, 4. Fixing our Infrastructure for our roads and homes, 5. Lowering Taxes. There are many more issues I am running to fight for, but these are some of the main ones I plan to focus on.

As I mentioned before, Gwen Moore has been in office since 2005 or as we know best a Career Politician. Career Politicians Like Gwen Moore have continuously been office only to deliver o n leftwing rhetoric rather than policy for the People; I believe it is time we have a new face for this district… why not try me! Milwaukee deserves a Congressman who puts people before politics and is a faithful servant to the people. I was born and raised in Milwaukee, I graduated from North Division High School in 1978 and went on to study at UW Parkside and MATC. My father and uncle owned Rogers and Rogers Soul Brothers Supermarket, and running for office is not how I spend my free time. I have worked for almost 30 years delivering gift baskets and newspapers for two local businesses and sing in two gospel choirs: All Saints Catholic gospel Choir and MPS Alumni Choir. With these experiences, I have been around and will continue to be around to do the work that is needed to turn this District around. To anyone who asks the question, “what does a Delivery driver know about being a congressman?”, I say to them, as a Businessman: maybe it will take a delivery driver to actually deliver on the issues I am running on to fit the needs of the people.