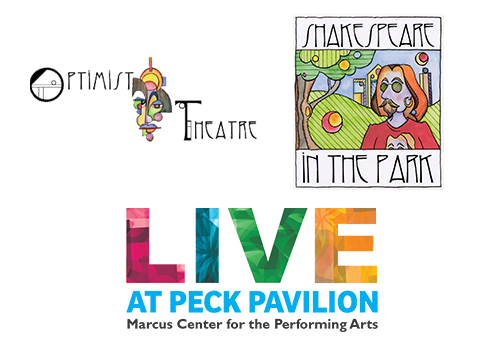 MILWAUKEE, WI (Tuesday, March 21, 2017) –– In a bold move to discover what they “may be,” Shakespeare in the Park, Milwaukee’s free outdoor summer theater, is moving to the Peck Pavilion at the Marcus Center for the Performing Arts.

This July, Shakespeare in the Park is partnering with the Marcus Center to bring twelve performances of Shakespeare’s comic masterpiece “Much Ado About Nothing” to the heart of the city. The Peck Pavilion, an outdoor performance space on the corner of Kilbourn Avenue and North Water Street, provides valuable infrastructure, with excellent backstage and performance spaces, state of the art lighting and sound systems, and safe, comfortable seating for the audience.

Ron Scot Fry, Artistic Director and co-founder of Shakespeare in the Park, offers this perspective: “Before the move to the Peck Pavilion, we built from the ground up each season, creating performance and backstage space from scratch, bringing in all of our lighting and sound systems. We spent resources on making the audience safe and comfortable. Our partners, both COA and Alverno, were extraordinary in their support to overcome those challenges. But with the infrastructure at the Peck, we can focus our resources more on the play itself.”

The Marcus Center is thrilled to have live theater in the Peck Pavilion. “As part of our continued evolution of the LIVE @ Peck Pavilion performance calendar, the new partnership with Optimist Theatre allows us to broaden our impact on the entire community,” says Paul Mathews, President and CEO of the Marcus Center for the Performing Arts. “With the generous support of The Molitor Charitable Trust, Shakespeare in the Park helps us offer a truly comprehensive 8-week schedule of music, theater, film and dance.”

Community Connections
A vital part of Shakespeare in the Park’s mission is to be a gateway theatre, accessible to people from all backgrounds and walks of life. At every performance, a company member asks the audience, “Is there anyone here who has never seen live theatre before?”  Every season, there are hands in the air.

The Marcus Center supports this mission. In addition to hosting, they are rolling Shakespeare in the Park into their extensive free performance series called LIVE @ Peck Pavilion.

According to Susan Fry, Shakespeare in the Park Executive Director, “This move to Peck represents a quantum leap forward in our ability to connect with inner-city community organizations. The Marcus Center’s success rate in bringing people who may not otherwise be able to experience live theatre – be it transportation, awareness, or desirability issues – is impressive. Blending our programs presents mighty potential.”

Going to the Show
William Shakespeare’s beloved comedy “Much Ado About Nothing” will be presented on three weekends from July 6-22, 2017. Milwaukee theatre luminaries Jim Pickering* and Todd Denning* have already joined the cast. Auditions are on the calendar for mid-March. “Much Ado” will be directed by Shakespeare in the Park Co-Founder Tom Reed, with dramaturgy by Co-Founder M.L. Cogar.

Attendance is free to the public, and a number of special group days are already in the works. Details about going to the show are available at www.FreeShakespeareInThePark.org.

About Shakespeare in the Park
Shakespeare in the Park is the creation of Optimist Theatre, a 501(c)3 non-profit theatre company. These shows are free to attend but far from free to produce. They are supported by grants from the Isabel and Alfred Bader Foundation, the Harry & Lynde Bradley Foundation, Paris Dentistry, the Wisconsin Arts Board, the Milwaukee Arts Board, and other organizations dedicated to arts and community in Milwaukee. A substantial portion of the funding comes from individual community members who believe that Shakespeare in the Park is important – to Milwaukee, to the community – and a vital element of a city with a rich theatre tradition.
*Members of Actors’ Equity Association