Senator Agard Sworn-In, will be the next State Senator from the 16th Senate District beginning January 4th

MADISON – Senator Melissa Agard (D-Madison) was sworn in as the next State Senator for the 16th Senate District. In a socially distant ceremony, Senator Agard was sworn-in by Supreme Court Justice Jill Karofksy and signed her name as the 32nd female state senator in Wisconsin history.

Senator Agard released this statement on her swearing-in:

“It is my honor to be sworn in as the next state senator for the 16th Senate District. As a Madison native, I am thrilled to be able to represent the community that I love, the city that I grew up in, and the greater community in which I am raising my family. As the voice within state government for nearly eight years, I take it as my solemn duty to serve my constituents. I am looking forward to continuing our work in the 2021-2022 session.

I am eager to begin my fifth term in state government in a new chamber. I am grateful for the lessons I learned during my time in the Assembly, as well as the relationships I have made with my Assembly colleagues. I look forward to continuing to advocate for the shared values of my district, as well as collaborating with newly elected and veteran legislators, in both the Senate and the Assembly, to work together to make Wisconsin a better place for everyone.

It’s clear that, even during times like this, Wisconsinites from across my district and across the state want to know that Wisconsin is a safe place for everyone to reach for their dreams; where we can invest in a better tomorrow; where future generations want to live, work, and raise a family; where we lift each other up and move forward; and where we plant seeds for tomorrow.

I am ready to roll up my sleeves and get to work for my district and the state of Wisconsin. Let’s get to work!” 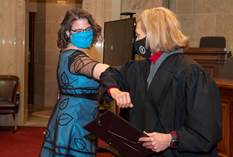 Hygiene products are necessities, not luxuries

Senator Agard Votes to Start Modernization of the Unemployment System

The State Senate met to take first steps to upgrade the unemployment system shortcomings after nearly a year of issues.