Scottish Band Dallahan at the Irish Cultural and Heritage Center on Friday, Sept. 23

Wherever they perform their intoxicating musical mix, they carry their audience along on a breathtaking journey. 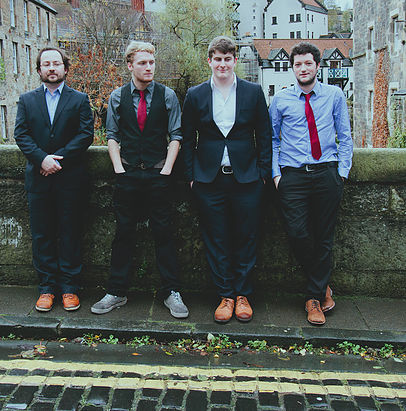 Dallahan. Photo courtesy of the Irish Cultural and Heritage Center of Wisconsin.

Scotland’s Dallahan will bring their modern interpretations of original and traditional Irish tunes and songs together with Scottish and Hungarian traditions – all skillfully blended with jazz and swing influences – to the Irish Cultural and Heritage Center, 2133 W. Wisconsin Ave., Milwaukee, on Friday, Sept. 23 at 7:30 p.m.

Since exploding onto the international folk music scene in 2013, the Edinburgh-based quartet has performed at prestigious festivals in Europe and the United States including Celtic Connections in Glasgow and Milwaukee Irish Fest, where they returned for a second year in August. Wherever they perform their intoxicating musical mix, they carry their audience along on a breathtaking journey.

Each member is an established, award-winning performer in various musical styles from classical and jazz to Balkan and Celtic. Now winning awards as a band, they have collaborated with other well-known artists including Scottish singer-songwriter Dougie MacLean and the Royal Scottish National Orchestra. At the band’s core are singer/guitarist Jack Badcock and multi-instrumentalist Ciarán Ryan. They are joined by fiddle player Jani Lang and Andrew Waite on piano accordion.

A Folk Radio UK review of their 2016 CD, Matter of Time, said they “have created a sound that unifies, rather than exemplifies the regional differences offering something new, distinct and infinitely appealing.”

“Dallahan is like a world music festival in one group, all trad, all Scots, all world and all totally, completely new…virtual masters of their instruments, blazing away in extremely rich and complex arrangements.” – LiveIreland