Milwaukee, WI (March 2016) – The Villa Terrace Decorative Arts Museum is delighted to announce its first-ever commission for a site-specific installation amid its formal gardens. Nature in Three Parts (June 2–September 18, 2016) features the work of Milwaukee-based environmental artist Roy Staab. The exhibition encompasses Shadow Dance, Staab’s newest site-specific installation in the Villa’s Renaissance Garden; Suspended in Time, a survey of photographs highlighting his previous national and international installations in the museum galleries; and Beyond Baskets, an exhibition guest curated by Staab with works on loan from the collection of Jan Serr and John Shannon.

The exhibition opening reception will be held on Thursday, June 2, 2016 from 6:00–8:00 p.m. with an artist’s talk at 7 p.m. The public is also invited to the opening of the Renaissance Garden on June 5 from 1:00 to 5:00 p.m. Other events include a dance performance by Wild Space Dance Company and a panel discussion in conjunction with the exhibition closing.

What is Environmental Art?

Emerging in the late 1960s, Environmental Art developed as a medium for artists to interact directly with the natural world. Often using materials found on the site of their installations, environmental artists create works that communicate with and reflect the natural environment. Seminal works such as Robert Smithson’s Spiral Jetty and Michael Heizer’s Double Negative, both completed in 1970, have influenced later artists working in Environmental or Land Art. Unlike these works, which left permanent marks on the land, Staab’s work rests lightly. His assemblages of natural materials gradually decay into the environment without a trace.

After completing his most recent installations in Gujarat, India, Staab has returned to his hometown of Milwaukee to create his newest work for the Villa Terrace Decorative Arts Museum, using willows gathered from Milwaukee County Parks. A maker of site-specific environmental installations, Staab works with materials found at or near the site including reeds, stones, saplings, mud, and snow. His work reflects the environment from which it is created and mimics the innate geometry and structure of nature. Staab’s work is ephemeral. He strives to achieve and photograph a perfect moment before the art is taken back by nature.

Beginning his artistic practice as a painter, Staab then experimented with drawing and this evolved into site-specific installations using natural materials. Staab built his first installation in 1979 and began creating site-specific installations with local natural materials in 1983. A graduate of the University of Wisconsin-Milwaukee, he has exhibited at local venues including the Milwaukee Art Museum, Museum of Wisconsin Art, Lynden Sculpture Garden, and Kohler Art Center.  He has also led residencies and workshops and exhibited his work internationally in France, Italy, Japan, Poland, Korea, Russia, and most recently, India. His work is in international collections including Musée d’Art Moderne de la Ville de Paris, France; Metropolitan Museum of Art, New York, NY; and Milwaukee Art Museum, Milwaukee, WI.

About Nature in Three Parts

Staab’s site-specific work at the Villa Terrace Museum will be constructed at the base of a steep bluff, in The Renaissance Garden, a grassy area between the early twentieth-century Italian-style villa and Lake Michigan. Sited on the central axis of the grounds, between an obelisk and a waterfall staircase, the primary view of the sculpture will be from the terrace and the windows of the museum. Visitors may experience the work from the lower grounds. The installation will remain on the Villa Terrace grounds throughout the summer, changing with the season, and engaging and contrasting with the symmetrical beds of trees and flowers.

This exhibition, in the Villa Terrace galleries, surveys Staab’s previous work documented in photographs and video. Providing context to his current installation, these images depict his environmental installations in varied materials, changing seasons, urban and rural settings, in water and on land, and in locations throughout the world.

Beyond Baskets
Guest curated by Staab from the collection of Jan Serr and John Shannon, Beyond Baskets focuses on the transformative nature of contemporary basket making. Emphasizing line, structure, and materials, the exhibition showcases artists who adapt the vernacular of basketry as a vehicle for personal expression. According to Staab, “The parameters I used to select these pieces were that they needed to be unique, express geometry and simplicity, and touch some of the sensibilities I search for in my own work.” They are displayed in a circular formation that echoes the structure of many of Staab’s environmental installations. The exhibition includes works by Joe Hogan, Ueno Masao, Francina and Neil Prince, Deborah Smith, Polly Adams Sutton, Leslie Wilcox, Hiroi Yasushi, and Jiro Yonezawa.

Overlooking Lake Michigan, the Villa Terrace Decorative Arts Museum was designed and built in the style of an Italian Renaissance villa by architect David Adler in 1923. The building was originally the residence of former A.O. Smith president, Lloyd Smith, and his family. The museum features fine and decorative arts dating from the 15th through the 18th centuries, wrought-iron masterpieces by Cyril Colnik, the Renaissance Garden, and changing exhibitions. 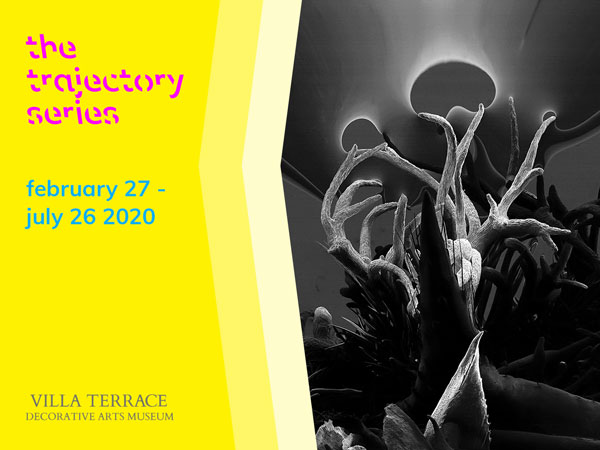 Where Art and Technology Converge – Guest-Curated by Christopher Willey –

One thought on “Roy Staab: Nature In Three Parts”