Rep.Stubbs Statement on Campaign Zero and Tamika Mallory’s Presentation to the Speakers Taskforce on Racial Disparities

MADISON- Yesterday, Movement Strategist Tamika Mallory and Attorney Angelo Pinto, as well as DeRay McKesson and Katie Ryan of Campaign Zero, spoke to the Speakers Taskforce on Racial Disparities regarding the use of No-Knock warrants. On these presentations, Representative Shelia Stubbs (D-77), Co-Chair of the Speakers Taskforce on Racial Disparities, released the following statement:

“I was so thankful that Social Justice Leader Tamika Mallory and Attorney Angelo Pinto took the time to discuss the progress they have made across the nation to implement Breonna’s Law. This law would ban the use of no knock warrants, and would ensure that all warrants are executed with proper notice. Their hard work to seek justice and reform after the death of Breonna Taylor is admirable, and I was proud that they could speak to us”

“Tomorrow marks the one year anniversary of Breonna Taylor’s killing by Louisville Police Officers that were executing a No-Knock warrant. One year later, we continue to fight for justice for her and her family. We owe it to Breonna Taylor and her loved ones to reform the broken practice that led to her death.”

“As Co-Chair of the Speakers Taskforce on Racial Disparities, I refuse to let the issue of No-Knock warrants go unaddressed, and I remain committed to passing meaningful reform in the state of Wisconsin.” 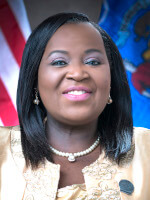