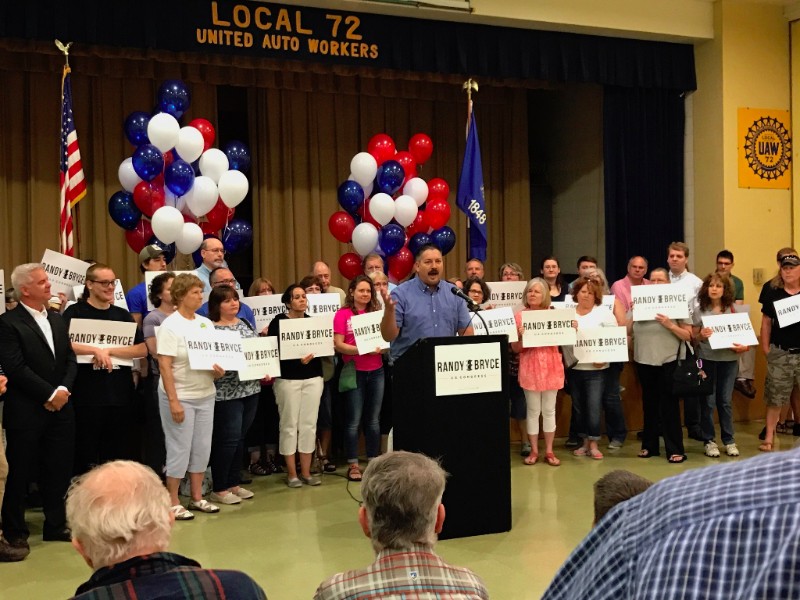 KENOSHA—Less than a week after announcing his campaign for Congress against House Speaker Paul Ryan, ironworker Randy Bryce held his first campaign rally this morning at the United Autoworkers Local 72 Hall in Kenosha, Wisconsin.

“To have so many people show up personally to support our campaign was incredible,” Bryce said. “The momentum our campaign has seen online since we announced on Monday has been huge, and is only made stronger by those who came in person to show that they will fight for our shared values of strengthening the middle class and fighting for equality.”

Bryce’s campaign launched on Monday morning and released a video outlining his core messages, which include fighting for access to quality, affordable healthcare for everyone, and standing up for those who don’t currently have a voice in the conversation and have been forgotten by our leaders in Washington, D.C.

The campaign and Bryce’s message was met with immediate enthusiasm on Monday, and continued to grow over the course of the week. His launch video has been seen millions of times and shared by tens of thousands of people since Monday.

On Friday afternoon, the campaign released an abbreviated version of the launch video, linked here.

Bryce’s campaign for Congress can be found online at RandyBryceForCongress.com, at facebook.com/RandyBryce2018 and on Twitter at @IronStache.

The debates will be held across the district in order to allow voters from every corner of Southeastern Wisconsin an opportunity to hear Randy's vision for building a bigger table.

"I know the real threats to this country-- and I can tell you the free press is not the enemy."