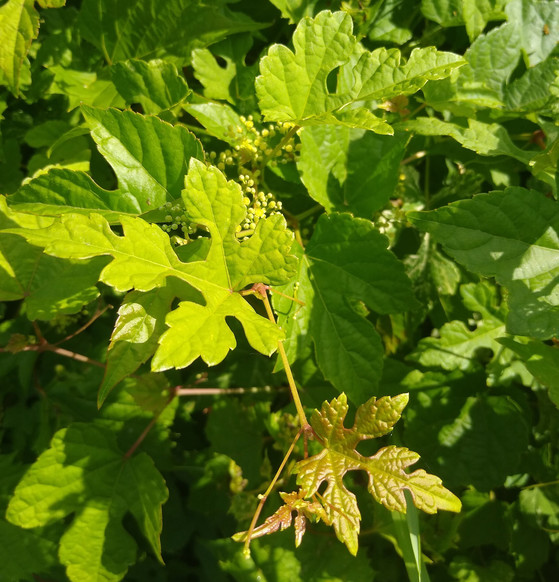 MADISON, Wis. – The discovery of an aggressive, invasive woody vine in Sturgeon Bay and quick action by local invasive species experts has contained the infestation of porcelain berry. The Wisconsin Department of Natural Resources (DNR) is asking property owners in the city and across Wisconsin to check for the plant.

Porcelain berry, an ornamental plant from east Asia that looks very similar to native and cultivated grapevine in summer and fall, poses a significant threat to trees and other plants in yards, parks and forests in Wisconsin.

The plant is listed as a prohibited species under state law NR 40 and is illegal to buy, possess, transport, transfer or introduce in Wisconsin. Find a fact sheet for porcelain berry and its lookalikes and learn more about the plant on the DNR website.

“Thanks to the discovery and quick action by the Door County Invasive Species Team and good cooperation from the property owner, the threat from porcelain berry at this site has been contained,” said Jason Granberg, DNR invasive species specialist. “The discovery, far from Madison where the largest population was previously found, raises the red flag that porcelain berry might be more widespread than we thought. We encourage property owners to be on the lookout for this species this fall. We need help from homeowners in these neighborhoods to prevent the infestation from getting larger or escaping into other communities.”

This population was originally identified by a member of the Door County Invasive Species Team (DCIST) walking in a Sturgeon Bay neighborhood. Sam Koyen, DCIST coordinator and conservationist with the Door County Soil & Water Conservation Department, reached out to the DNR to report and document the population. Once the population was confirmed, DCIST reached out to the landowner to inform them of the potential negative impacts of porcelain berry, how to identify it and how to control it.

DCIST efforts to control porcelain berry expanded to include a mailing to surrounding properties to ask neighbors to help monitor for other populations and one-on-one site visits to provide hands-on identification techniques.

The group’s response to porcelain berry highlights other early detection prohibited species efforts that DCIST participates in, including the inventory and control of black swallow-wort and five-leaf akebia vine.

“The support from the Door County community and the entire Wisconsin conservation community in these control efforts has been outstanding,” Koyen said.

Groups like DCIST are playing a key and growing role in preventing new invasive species from getting a foothold in Wisconsin. Learn more about their work in the Summer 2020 Wisconsin Natural Resources magazine article, “Cooperative Endeavors Spell Success.” Please report invasive species by sending an email to Invasive.Species@Wisconsin.gov.