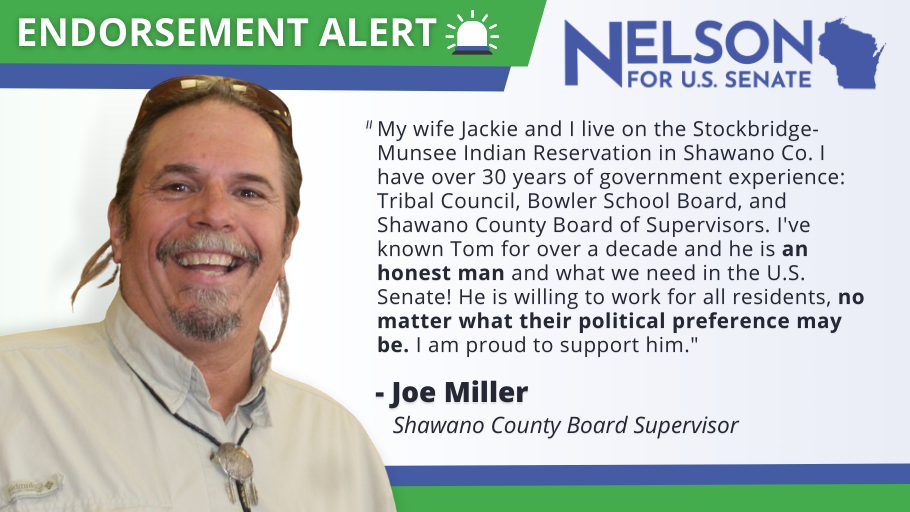 Image courtesy of Nelson for Wisconsin.

Appleton, WI – The Nelson for Wisconsin campaign released the endorsement of longtime tribal and community leader Joe Miller. Miller currently serves on the tribal council, Bowler School Board and as a Shawano County supervisor. Tom Nelson said, “I am honored to have the support of someone like Joe who is so well-respected in Shawano County and knows our campaign has what it takes to win in red counties. We are building support in all 72 counties to take on Ron Johnson.”

In his endorsement, Miller said, “My wife Jackie and I live on the Stockbridge-Munsee Indian Reservation in Shawano Co. I have over 30 years government experience, Tribal Council, Bowler School Board, and Shawano County Board of Supervisors. I’ve known Tom for over a decade and he is an honest man and what we need in the U.S. Senate! He is willing to work for all residents, no matter what their political preference may be. I am proud to support him.”

The campaign has also launched a TikTok that can be found at @nelsonforwi.

“Using people with HIV/AIDS and their loved ones to advance conspiracy lies is a new low even for Wisconsin’s bottom-feeding embarrassment.”