The Principle Over Party campaign is breaking the mold.

DECEMBER 29, 2017 – As 2017 draws to a close, Mike McCabe’s Principle Over Party campaign for governor has traveled more than 37,000 miles just since McCabe made his candidacy official on September 12, criss-crossing Wisconsin listening to and engaging with voters in every part of the state.

There have been 82 events that have been open to the public and media, as well as 49 other stops along the way. The campaign also has held 57 neighborhood organizing meetings and volunteer trainings in communities across the state. A corps of 117 volunteers has already been assembled to help make all these grassroots activities happen, with county and zip code captains being lined up in every part of Wisconsin. 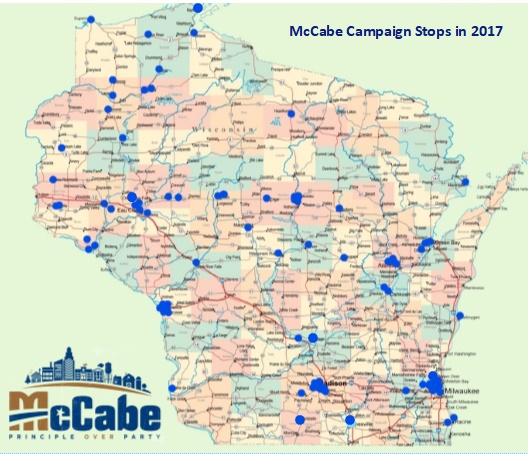 The Principle Over Party campaign is breaking the mold when it comes to endorsements, challenging the established thinking that they need to come from prominent officials, party insiders and other “VIPs.” Endorsements are instead being sought from regular people who can offer theirs on the campaign’s website at governorbluejeans.com/endorse. Mike’s candidacy has received close to 400 endorsements so far.

“Our campaign is headquartered at kitchen tables and in living rooms all across the state,” McCabe said. “I am determined to do everything in my power to offer a way out of the dismal conditions of modern-day politics. The rulebook being followed by virtually every other candidate running for office is one of the biggest reasons why people hate politics more and more and trust elected officials and our government less and less. Giving people a chance to choose a very different kind of leadership and creating a new politics starts with throwing that rulebook out the window.”

Despite being allowed under state law to accept donations as large as $20,000 from individuals and $86,000 from political action committees, McCabe’s Principle Over Party campaign is not taking any single donation over $200. Supporters are allowed to give more than once, but no more than a total of $1,000 for the entire campaign.

“This campaign is a 21st Century version of how Bill Proxmire won statewide elections for 30 years in Wisconsin. We’re pounding the pavement just like he did and reaching out neighbor to neighbor. And we’re also taking full advantage of social media and other online tools Prox didn’t have at his disposal when he was running,” McCabe said.

"Local democracy has been commandeered by those currently in charge at the State Capitol."

2 thoughts on “Principle Over Party Campaign Pounds the Pavement”