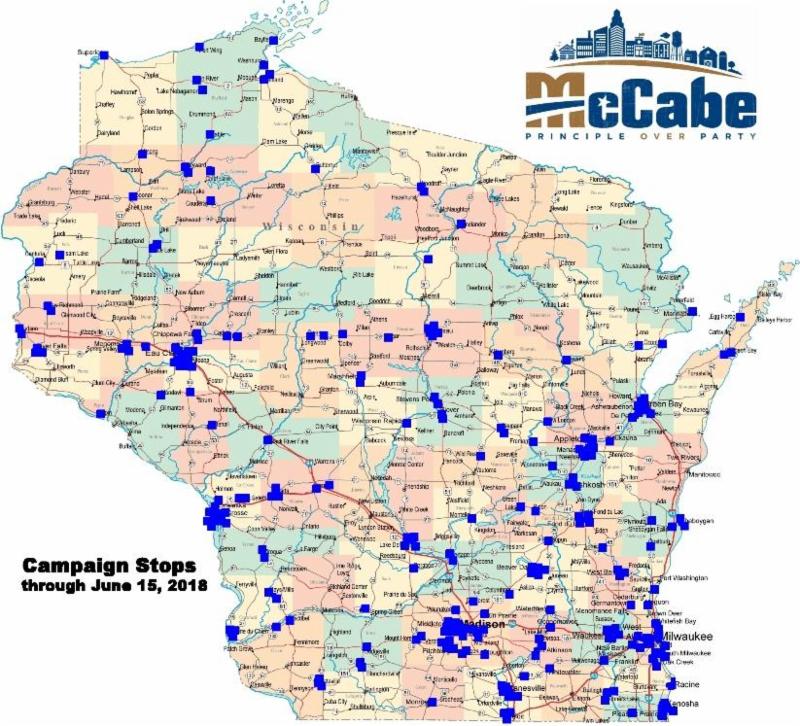 JULY 3, 2018 – By mid-June, Mike McCabe’s Principle Over Party campaign for governor had traveled more than 85,000 miles connecting with voters in every part of the state since last September when McCabe made his candidacy official. That’s the equivalent of three trips around the world and then some.

Well over 400 campaign related events have been held – all within Wisconsin and open to anyone wishing to attend. All the campaign stops and neighborhood organizing meetings inspired the formation of a grassroots brigade that now includes more than 2,500 volunteers working for the campaign and reaching out to voters across the state.

“We don’t have the big money, but when it comes to grassroots organizational strength ours is by far the richest campaign in the race,” campaign manager Christine Welcher said. “This is about overcoming money power with people power.”

Volunteers gathered 6,481 signatures on nomination papers – more than three times the number candidates for governor needed to have by June 1 to get on the ballot and nearly 2,500 more than the maximum number of signatures state law allows candidates for statewide office to submit to election authorities.

Campaign volunteers also have spent more than 315 hours displaying banners and signs at busy intersections and freeway overpasses in locations across the state where Department of Transportation traffic counts indicate between 1,000 and 5,000 vehicles pass by each hour. Participants have dubbed these displays “people-powered billboards.”

The Principle Over Party campaign emphasizes volunteer-driven grassroots campaigning as McCabe is the only candidate in the race refusing to take the huge political donations candidates for governor can legally accept. While state law allows donations as large as $20,000 from individuals and $86,000 from political action committees, McCabe’s Principle Over Party campaign is not taking any single donation over $200. Supporters are allowed to give more than once, but no more than a total of $1,000 for the entire campaign.

McCabe is practicing what he preached for many years. He is a longtime independent watchdog and clean government advocate. He helped start the nonpartisan Wisconsin Democracy Campaign and led the group for 15 years as its director, working to track the money in elections and expose corruption resulting from the transactions between wealthy donors and elected officials. He went on to start up the grassroots group Blue Jean Nation to empower citizens to challenge the political establishment to change its ways.