Research finds that 71 percent of women with animals seeking shelter reported that their partner had threatened, hurt or killed their animal.

MILWAUKEE – The Wisconsin Humane Society (WHS) announced that it has received a $20,000 grant from PetSmart Charities, the leading funder of animal welfare in North America, to support the Safe Haven program. The program offers up to 60 days of shelter for animals of domestic violence survivors, in coordination with the Sojourner Family Peace Center.

”For nearly 20 years, PetSmart Charities has worked with Wisconsin Humane Society (WHS) to help local pets in need,” said Kelly Balthazor, regional relationship manager at PetSmart Charities. “We are proud to support WHS’s Safe Haven program which works to help not only pets in crisis – but also to keep pets and the people who love them together.”

Research finds that 71 percent of women with animals seeking shelter reported that their partner had threatened, hurt or killed their animal. Abusers often use animals as pawns to manipulate and control, taking advantage of the victim’s concern for his or her animal. Abusers may threaten, harm, or kill animals to intimidate victims, demand silence about the abuse, or prevent them from leaving.

Many people are hesitant to leave a dangerous situation because they fear for their animal’s safety. The Safe Haven program makes it possible for domestic violence survivors to leave an abusive relationship without losing their beloved companion animal.  Since its inception in 2014, the program has helped more than 200 animals.

WHS was founded in 1879 and is the oldest and largest shelter in Wisconsin, annually serving 40,000 animals and the people who love them. WHS is an independent nonprofit and receives no general government funding and is not part of any national umbrella group. WHS operates shelters in Milwaukee, Ozaukee, Racine, Brown and Door Counties, as well as a spay/neuter clinic in West Allis.  The organization offers adoption services, youth programs, veterinary services, retail stores, wildlife rehabilitation, training classes and more. To learn more, visit www.wihumane.org.

PetSmart Charities, Inc. is committed to finding lifelong, loving homes for all pets by supporting programs and thought leadership that bring people and pets together. Through its in-store adoption program in all PetSmart® stores across the U.S. and Puerto Rico, PetSmart Charities helps to find forever homes and families for more than 500,000 shelter pets each year.  PetSmart Charities also provides grant funding to nonprofits aligned with its mission. Each year, millions of generous PetSmart shoppers help pets in need by donating to PetSmart Charities using the PIN pads at checkout registers inside PetSmart stores.  In turn, PetSmart Charities efficiently uses more than 90 cents of every dollar donated to fulfill its role as the leading funder of animal welfare in North America, granting more than $390 million since its inception in 1994. Independent from PetSmart Inc., PetSmart Charities is a 501(c)(3) organization that has received the Four-Star Rating from Charity Navigator, a third-party organization that reports on the effectiveness, accountability and transparency of nonprofits, for the past 16 years in a row – placing it among the top one percent of charities rated by this organization. To learn more visit www.petsmartcharities.org. 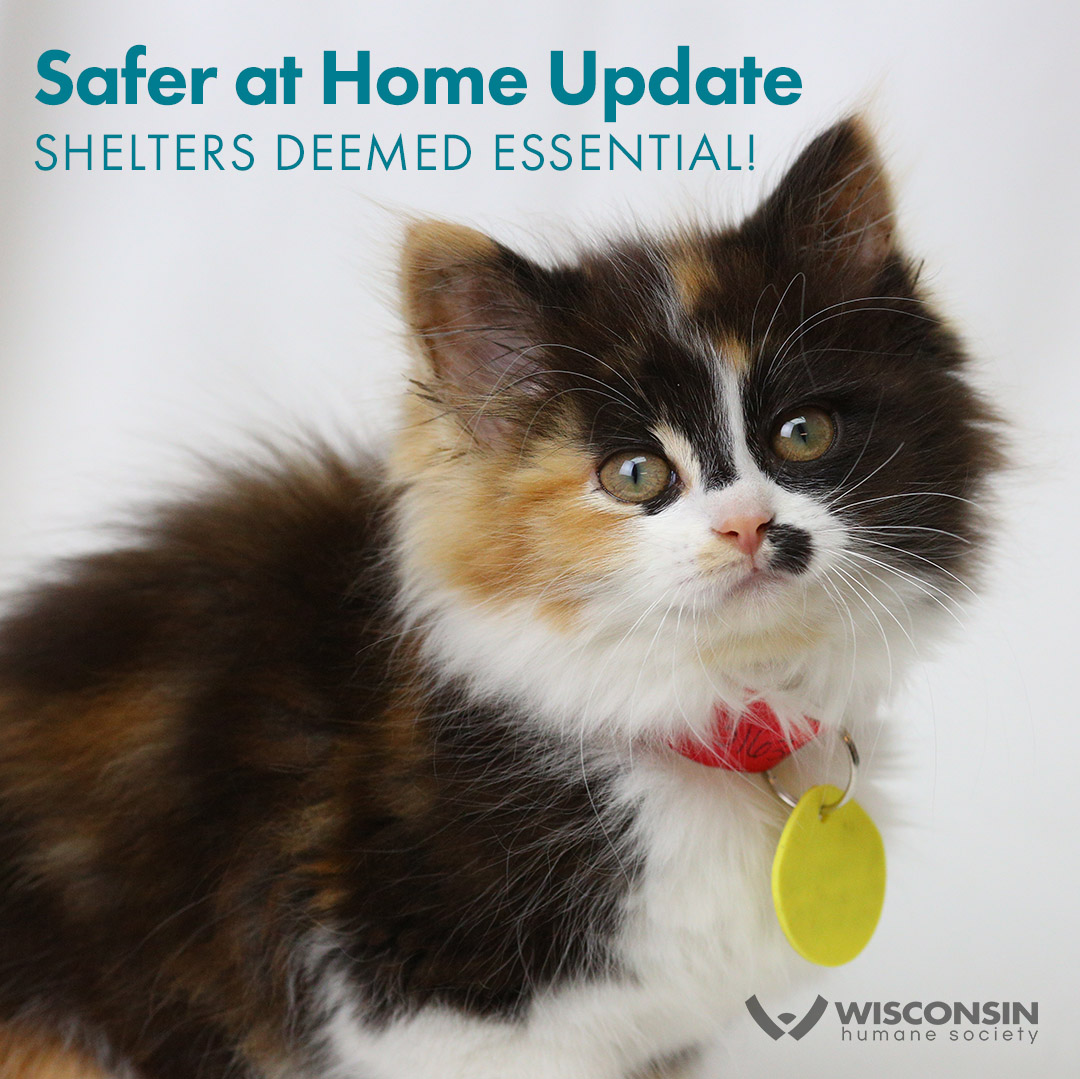 #SaferAtHome Update: The Wisconsin Humane Society will remain hard at work during the statewide shutdown

May 1st, 2019 by Wisconsin Humane Society

Research finds that 71 percent of women with animals seeking shelter reported that their partner had threatened, hurt or killed their animal.