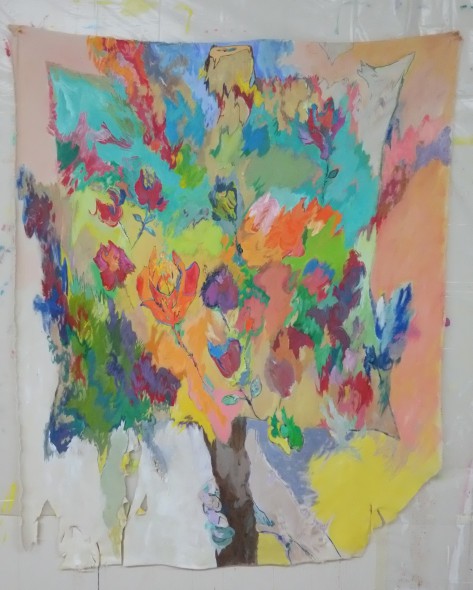 Curated by Claudia Arzeno and gallery director Debra Brehmer, the exhibition brings together two artists who individually consider the entwined relationships between the artist, his or her influences, creative production as well as the relationship these have to both human nature and the natural world.

Vélez, one of three Milwaukee-affiliated artists in the 2014 Whitney Biennial, is known for his paintings and photo collages that use social media references to express commentaries on cultural, political and racial issues. This body of work, Revealing Nature: Pedro Vélez Social and Private Portraits, steps away from these previous explorations and delves into more personal and intimate subject matter.

In this new series, Vélez looks at the idea of the artist’s muse — in other words, the artist’s source of inspiration. What does this influential person, thing, place or idea say about his or her nature? The artist has revisited past photographic work as well as personal relationships, romantic relationships, break ups and places in order to analyze what tends to spark his creativity.  In an effort to be more self-aware, Velez asks himself why he keeps going back to certain people as sources of inspiration.  The findings were then translated into new portraits, flower paintings, abstracted depictions of the body and intimate photo collages that function as a fractured narrative in which the dynamics of personal and platonic relationships are blurred.

Greg Klassen is a Milwaukee-based artist. Klassen’s notion of “Revealing Nature” places the artist, the studio and the natural world in a dynamic relationship that explores how ideas of growth, inspiration, survival, decay and creativity come to fruition. He breaks down the walls between art production and the forces of nature. For example, Klassen has buried his painted canvases in compost piles to let the natural processes of decay color and shape his compositions. He has also brought plants into the studio, tossed them into piles of studio debris, set up a home-made watering system and allowed nature to take its course. He has said of his work, “My art is the design of experiments, the staging of serendipitous expeditions.” This exhibition will feature several projects including a series of sculptural sketchbooks.

His work as both an artist and writer has been discussed in the LATimes, Chicago Tribune, Al Jazeera America, Huffington Post, New York Times, Artforum, Mutual Art, Frieze, Artspace and The Miami Herald among many other publications. For 10 years Pedro Vélez maintained a regular column about the art scenes in San Juan and Chicago for Artnet Magazine. In addition, his writing has been published in Newcity, New Art Examiner and Arte al Día.

Pedro Vélez’s work merges his interest in art criticism (including his own writing) and journalism into what he calls “visual essays” that take the form of large sculptural paintings, photographic collages, and limited edition posters and postcards resembling the look and feel of movie posters. Velez also incorporates text in his work, based on hashtags lifted from Twitter, that are scathingly critical as well as poetically cryptic. Taken together, Vélez’s multi-disciplinary approach creates a vibrant, stream-of-consciousness commentary on a variety of issues, encompassing race, politics, and other aesthetic concerns.

Greg Klassen
Greg Klassen (b. 1965) earned his bachelor’s degree at the University of Wisconsin-Oshkosh and did advanced study at Kunst Akademie Dusseldorf, Germany. He was one of the last artists to study under Gerhard Richter in the 1990s.

A major exhibition, Perishable Atlas, was staged at the University of Wisconsin-Milwaukee’s Institute of Visual Arts in 2011. He recently exhibited a collaborative  project at Usable Space, Milwaukee. Other exhibitions include the Watrous Gallery, Walker’s Point Center for the Arts, Jurgen Kalthoff Gallery (Germany).

Portrait Society Gallery
Portrait Society is a contemporary art gallery in Milwaukee, WI dedicated to the issues surrounding the genre of portraiture. Established in 2008, the gallery showcases both current and historic artists who work broadly and loosely with the conceptual ideas embedded in portrait traditions.