Celebrate the program’s 35th anniversary on Sunday, May 29, 2016 at the first annual Orgullo Latino Festival. 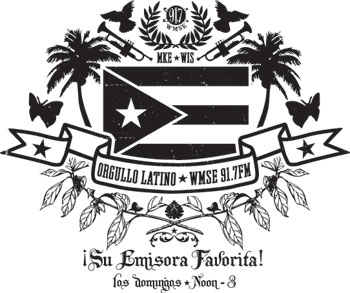 For 35 years, WMSE’s Sunday show, Orgullo Latino, has been heating up the airwaves. Celebrate the program’s 35th anniversary on Sunday, May 29, 2016 at the first annual Orgullo Latino Festival. Enjoy a live broadcast with team Orgullo Latino followed by live music provided by the famous local salsa groups Nabori and Clave y Afinque. DJ-Clos with also be present.  Food will be available for purchase from Papi O’s Cocina.  Admission is a suggested donation of $5 for the festival, which will take place at the Wherehouse/Patio, 818 S. Water St. Milwaukee, starting at noon.

Orgullo Latino broadcasts live every Sunday from Noon to 3 p.m. at 91.7FM and wmse.org. Program hosts El Maestro Harry O and Professor Dr. Hector Perez Laboy play a great mixture of tropical music with high emphasis on hard core new and old school salsa music.  Merengue, bachata, Latin jazz, classic ballads, Latin pop and reggaeton are also part of the music mix. It also informs the listeners about upcoming events in the community and has other speakers on topics of general interest. The show is in Spanish but once in a while we do bilingual.