One Year Out From Election Day, WisDems Celebrate 1Year2Win Weekend of Action

MADISON, Wis. — With exactly 365 days until Election Day, the Democratic Party of Wisconsin is celebrating a successful 1Year2Win Weekend of Action, with more than a thousand volunteers, surrogates, and organizers reaching out to voters in every corner of the state to ensure we defeat Ron Johnson, re-elect Gov Evers and Attorney General Kaul, and grow Democratic strength down-ballot.

“This weekend, Democrats across Wisconsin reached out to more than 100,000 voters to grow our best-in-class organizing program that will power us to victory exactly one year from today. Volunteers spent the weekend knocking on doors, making phone calls, and talking with voters about the issues that matter most to them and paved the way to re-electing Governor Evers, defeating Ron Johnson, and then winning Democratic victories up and down the ballot.

“While Republicans continue to obstruct and divide, President Biden, Governor Evers, and Democrats up and down the ballot are delivering on the priorities that matter for Wisconsin’s working families, from investing in our infrastructure to delivering the American Rescue Plan to ensure our communities build back better from the pandemic. Every day between now and next November counts, and after this weekend, we can be sure that Wisconsin Democrats won’t waste a single moment.” 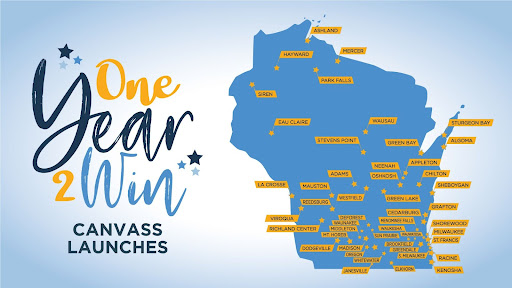 One Year Before the Election, Ron Johnson Is the Least Popular Statewide Elected Official After Using Time in Senate to Enrich Himself and Ignoring Needs of Wisconsinites