MADISON, Wis. — One Wisconsin Now is calling on U.S. House Speaker Paul Ryan and the Wisconsin Congressional delegation to pass a short-term federal funding bill that includes assistance for Flint, Michigan. Republicans in Congress have dragged their feet in helping the city and there are efforts underway this weekend to get Flint the help they need. ProgressNow affiliates, including One Wisconsin Now, across the country are demanding action from their congressional leadership.

“What happened in Flint should serve as a warning to every community of what can happen when the bottom line is put above people’s’ lives,” said One Wisconsin Now Executive Director Scot Ross. “No American should be deprived of clean, safe water. Speaker Ryan and his fellow Republicans in the House can either act now to help or be responsible for this appalling crisis continuing to drag on.”

The Flint Water Crisis began in 2014 when an unelected emergency manager decided to switch the city’s water source without applying the proper corrosion controls as a fiscal austerity measure. Lead and other harmful chemicals leached from the pipes into the drinking water supply causing a litany of health issues for families. To this day, people cannot safely drink the water from their taps without a filter, which often fail. Families continue to rely on bottled water for their daily needs.

“Republicans in Michigan caused this mess but have done little to help Flint, so we need Congress to step up. The people of Flint are fighting every day for justice and access to clean water, but we cannot do it alone,” said Lonnie Scott, Executive Director of ProgressNow. “We need allies from around the country to stand Flint residents in this fight in Washington D.C. They can no longer live with inaction and bottled water and this funding is a step in the right direction. We need Congress to act immediately to provide relief for Flint.”

ProgressNow is a network of progressive advocates across the country with affiliates in 22 states. 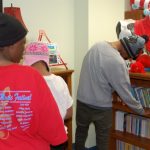