App is aimed at supporting children battling disease with words of encouragement; now for the 2nd year in a row, an MPS student-designed app is eligible for national fan favorite award 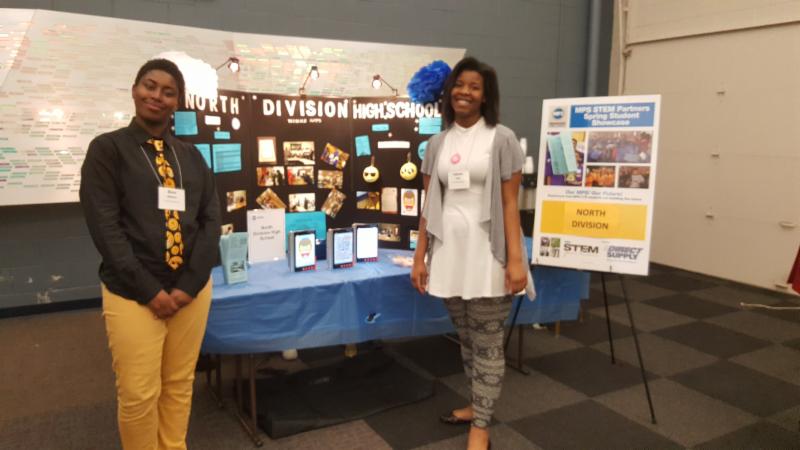 MILWAUKEE (May 17, 2016) – For the second straight year, a group of Milwaukee Public Schools students studying mobile app development is among the winners of a national app competition.

North Division High School students Tatiana Loyd and Qiaira Mathews‘ “Emoji Encouragement” app is one of just six national winners in the Lenovo Scholars Network competition, Lenovo and NAF announced this week. The app is designed to support students battling cancer, sickle cell anemia and other diseases with words of encouragement. Students stayed after school, worked from home and even came in over spring break to work on the app and accompany presentation, North Division lead computer science teacher Melissa Menge said.

The national win means “Emoji Encouragement” is now eligible for a national fan favorite award.  Voting is open through July 19 at: www.lenovoscholars.com/vote2016.

North Division is one of two MPS high schools to host a NAF Academy of Information Technology, which offers students industry-specific classes related to the growing field of IT. Students participate in work-based learning activities to put their lessons into action.

The two MPS schools – North Division and Washington High School of Information Technology – are also among only 30 schools nationwide to take part in the Lenovo Scholars Network, which works to train the next generation of mobile application developers.

Families interested in enrolling their student in North or Washington for the upcoming school year can contact the schools or go online to mpsmke.com/EnrollMPS.