Fantastic line-up of performers taking over the lakefront June 21 and 22; Purchase tickets between May 5 and June 1 to be entered for a chance to win a ride with the Aerostars Aerobatic Team, a tandem jump with the All Veteran Group Parachute Team, or a U.S. Navy Blue Angels Total Experience Package 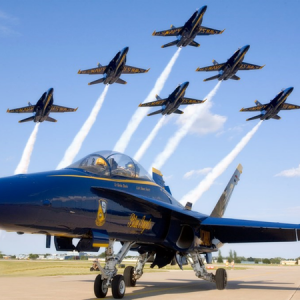 Milwaukee, Wis., May 5, 2014….The organizers of the Milwaukee Air & Water Show, presented by Marcus Hotels & Resorts, today announced a Spring Fever Ticket Deal, offering reduced prices on all Center Point Reserved Seating.  Tickets are now on sale for $20 and could include more than just premier seating for three lucky individuals.  As part of the promotion, all air show fans that purchase tickets between May 5 and June 1 will be entered for a chance to win one of three spectacular air show prize packages: a ride with the Aerostars Aerobatic Team*, a tandem jump with the All Veteran Group Parachute Team* or a Blue Angels Experience Package. (*some restrictions apply)

The Aerostars ride includes a meet and greet session with the pilots and a ride around Milwaukee in the Yak 52TW.  The tandem jump with the All Veteran Group Parachute Team includes an exhilarating skydive experience strapped to a former U.S. Army Golden Knight.  The U.S. Navy Blue Angels Total Experience Package includes two additional tickets to the Flight-Line Club reserved seating area, a Blue Angels Merchandising Packet and an exclusive invitation to meet the Blue Angels pilots.

Reduced Center Point Reserved tickets are now available online at www.milwaukeeairshow.com.  For a chance to be entered to win one of the three exciting air show prizes, tickets must be purchased on or before June 1, exclusions apply.

Show organizers also announced today an additional lineup of eight exciting acts in addition to The U.S. Navy Flight Demonstration Squadron, the Blue Angels.  This year’s event plays host to some of the most world-renowned acts, making Milwaukee’s show one of the best in the country.

“This year’s show is expected to be one of the best in Milwaukee’s air show history with the highly anticipated return of the U.S. Navy Blue Angels and other premier acts,” said Paul Rogers, president of the Milwaukee Air & Water Show.

Rogers added that the show wouldn’t be possible without the support of its sponsors. “The Air Show not only provides entertainment on the lakefront, but the true mission of our show is to support our military and those who fight for our freedom.  The Air Show is our way of saying thank you to our military heroes who have risked their lives for ours, and we want to continue to offer our dedication and support of our military through the Milwaukee Air & Water Show.  We are able to bring one of Wisconsin’s largest, free, two-day summer events to the residents and visitors of Milwaukee because of our generous sponsors.  In order to make the show better each year, we encourage the community and local businesses to get involved and help grow our mission in support of our armed forces.”

As a presenting Air Show sponsor for the sixth consecutive year, Marcus Hotels & Resorts shares Rogers’ vision.  “We have thoroughly enjoyed watching the show grow into a summer tradition that people from Milwaukee, and throughout the Midwest, look forward to each year,” said Chris Anderson, senior vice president, Marcus Hotels & Resorts.  “With the return of the Blue Angels and other spectacular air and water acts, we are excited to be a part of this year’s event and to pay tribute to the men and women of our military who have given so much.”

For the best seating and prime viewing, reserved ticket packages, including lakefront parking, are highly encouraged.  Tickets are now available online at www.milwaukeeairshow.com.

To be front and center for all the air show action, Marcus Club VIP seating and admission packages are available.  Adult tickets can be purchased for $50 and children’s tickets are $25.  Children four and under receive free admission.  Passes include one gourmet luncheon buffet ticket and four drink tickets.  Those interested in Marcus Club VIP seating and special hotel event weekend packages can purchase tickets by visiting www.MKEAIRSHOW.com or calling 877-704-5327.

Center Point Reserved Seating offers prime viewing from the air show’s center-point area.  Adult tickets can be purchased for a reduced price of $20 (originally $30) and youth tickets are $10.  Children ages five and under receive free admission (lap child only – no chair provided).  Each Center Point Reserved ticket includes one reserved, individual chair in the open air seating area, access to private sanitary facilities and to the center-point seating food and beverage tent.

Beat the heat with an exclusive Reserved Sun Table Ticket Package for prime viewing of the air and water show from the center-point area.  The Sun Table Package can be purchased for $395 and seats eight people (adults and/or children).  Additional youth tickets can be purchased for $10.  Children ages five and under receive free admission (lap child only – no chair provided).  The Sun Table Ticket Package includes reserved seating at a large table for eight with a shady sun umbrella, eight admission passes, two lakefront premium parking passes, access to reserved seating area food and beverage concessions and exclusive sanitary facilities.  Sun tables are limited to 20 tables per day.

The A-4B Skyhawk is a post Korean War U.S. attack aircraft intended to be operated from aircraft carriers. During its tenure, the Skyhawk was successfully used by both the Navy and Marine Corps as the primary light bomber which carried out the initial U.S. air strikes of the Vietnam War. Air show fans will not want to miss the flight of this historic warbird over the lakefront.

Previously the All Veteran Parachute Team, All Veteran Group delivers a unique military experience featuring parachute demonstrations and tandem skydive jumps that highlight the performers’ distinctive skill-sets acquired through military service, all in support of veterans’ related interests and organizations.

Performing in the Yak 52TW, the Aerostars are a precision aerobatic demonstration team whose aerial ballet captivates air show audiences across the country. They will fascinate air show fans with their unique combination of graceful aerobatics flown in tight formation, spectacular breakaways followed by breath-taking opposing passes and awe-inspiring inverted maneuvers.

As the world’s largest airshow team, Team AeroDynamix offers a combination of graceful aerobatics with precision formation to fill the sky with non-stop action, smoke and noise.  With a team of experienced pilots, including military fighter pilots and private general aviation civilian pilots, Team AeroDyanmix flies day and night, captivating audiences across the country.

In partnership with the Air National Guard, John Klatt thrills millions of air show fans and spectators each year with a unique combination of aerobatic power, precision and performance.  John has served in the Air National Guard for more than 20 years – flying combat, air support and humanitarian missions throughout the world in the F-16 “Fighting Falcon” and the C-130 “Hercules” aircraft.

A solo performer, Matt has shown his skills and aerobatic talents to millions of fans at airshows all over the country.  His precise execution of each and every stunt leaves audiences in awe as he soars and tumbles through the air.

The Red Bull Stunt Helicopter is flown by pilot Chuck Arron, the first – and only- civilian pilot ever to be licensed to perform helicopter aerobatics in the United States.  Chuck amazes crowds through his breathtaking air show choreography including backflips, 360-degree rolls and a heart stopping tumble called the Chuckcilvak.

Mike Goulian doesn’t just fly an airshow, he attacks it.  Returning to the Milwaukee Air & Water Show in 2014, airshow spectators will witness the ferocity of a Mike Goulian air show performance.  Every roll, pull and tumble of his flight is a deliberate execution of precision.  With his aggressive approach to the airshow arena, Mike has mastered the ability to convey his message of passion through flight.

Also returning this year is Herb Hunter, the legendary “voice” of the Milwaukee Air & Water Show and air shows nationwide.

For information about the entire line-up, event details, show-site information and other news, please visit www.milwaukeeairshow.com. Follow the air show on Twitter @MKEAirandWaterand on Facebook for the latest Milwaukee Air & Water Show updates.