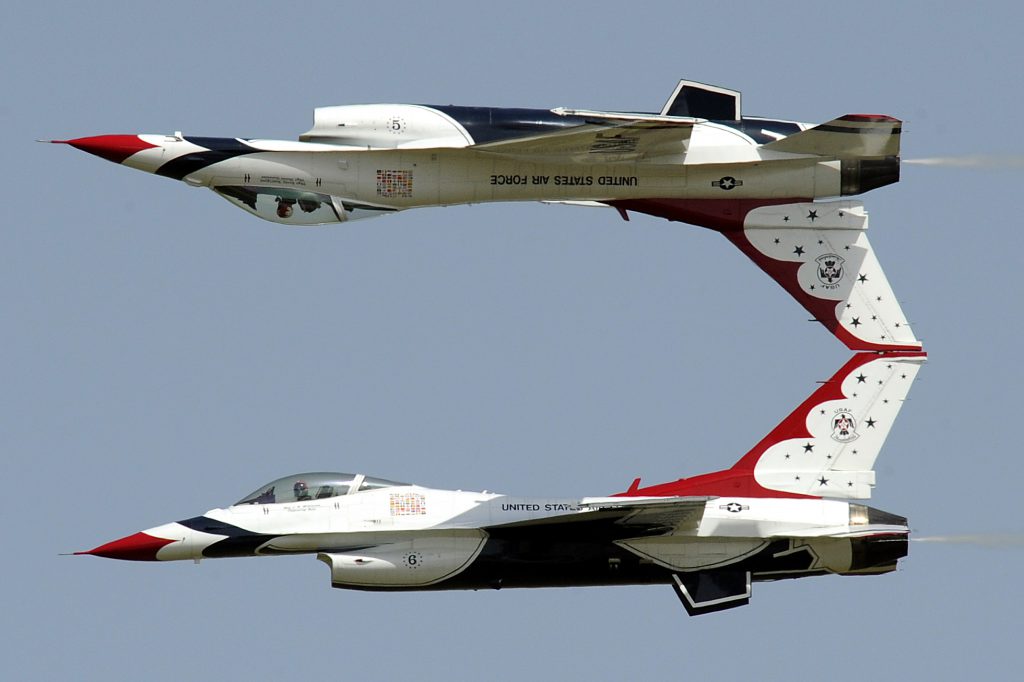 “Year after year the Milwaukee Air & Water Show continues to thrill audiences of all ages. We are excited to return as title sponsor for another exhilarating year on Milwaukee’s lakefront,” said Doug Gordon, president and CEO of WaterStone Bank. “As part of our mission to continually give back to the communities we serve, we are proud to honor and support our armed forces and military veterans. The Milwaukee Air & Water Show is pivotal in helping show our communities the value of the brave men and women who help to keep our country safe.”

The Thunderbirds, “America’s Ambassadors in Blue,” who also headlined the 2018 Air & Water Show, will return to Milwaukee’s lakefront this summer with six demonstration pilots flying the F-16 Fighting Falcon. Every year, the Thunderbirds will perform a series of approximately 40 maneuvers at nearly 80 air demonstrations throughout the U.S. The squadron has performed for more than 280 million people in all 50 states and 57 foreign countries over the course of its 66-year-long history. This year marks a special visit for the demonstration squadron as Air Force Capt. Michelle Curran, from Medford, Wis., will fly the Thunderbird #6 “Opposing Solo” Jet during the air show performance. Capt. Curran is only the fifth female pilot flying for the USAF Thunderbirds.

In addition to the return of the Thunderbirds, the Milwaukee Air & Water Show will welcome a new military act to Milwaukee – the U.S. Air Force F-35A “Lightning II” Demo Team. Spectators for the very first time will also take in a special USAF F-35, F-16, F-22, P-51 Mustang Heritage Flight Formation, honoring the contributions of every man and woman who has served in the USAF.

Based at Luke Air Force Base in Arizona, the F-35 Heritage Flight Team has evolved into the F-35 Demonstration Team. As the world’s only 5th generation multirole fighter, the F-35 Lightning II integrates advanced stealth technology into a highly agile, supersonic aircraft that provides the pilot with unprecedented situational awareness and unmatched lethality and survivability. Redefining the multirole fighter, the F-35 sets new standards in network-enabled mission systems, sensor fusion and supportability, aiming to serve as an information gatherer and transmitter in a vast network. Attendees can look forward to the full “five-course meal” showing fans everything this jet is capable of.

“With the Thunderbirds returning to headline the show, a first-time appearance from the U.S. Air Force F-35A, as well as an unprecedented line-up of aviation acts, this year is sure to be the best show yet,” said Paul Rogers, president of the Milwaukee Air & Water Show. “We are thrilled to have WaterStone Bank supporting the show once again as title sponsor, and thank our other generous sponsors and supporters. We look forward to another unforgettable show at the lakefront this July!”

The 2019 Milwaukee Air & Water Show will welcome an energetic host of water show acts, including the Badgerland Water Ski Team and Muskego Waterbugs Water Ski Teams, who will show off their dazzling aquatic acrobatics, as well as the Fox Lake Harbor Powerboat Formation Demonstration Squadron. The Milwaukee Fireboat and a demonstration from the U.S. Coast Guard Jayhawk Rescue Helicopter demonstration will show the crowd the Coast Guard’s detailed skill when dealing with crisis on the water. Additional water acts will be announced in the coming months.

While the Milwaukee Air & Water Show is free to the public at the beach areas, reserved seating with access to the best seats at the show is now available online. Ticket packages include the Center-Point Reserved package, the Flight Line Club package and the Sky Chalet VIP tickets. Each of these packages offers exclusive access to fantastic seats for the show, as well as access to food and beverage services. Reserved lakefront parking is also available for purchase online. To learn more about reserved seating packages and to order tickets online, please visit www.mkeairwatershow.com.

For those interested in learning more about the benefits and value of sponsoring the 2019 show and/or specific event activities, including VIP “Entertainment Chalets” and corporate entertainment packages, please contact Lena Levy with First Station Media, (414) 807-0032, or email at lena@firststationmedia.com.

The Milwaukee Air & Water Show, which draws nearly 400,000 people to Milwaukee’s lakeshore every year, has a significant economic impact on the city, provides the community with a meaningful understanding of our nation’s armed forces and supports military veterans.

About the Milwaukee Air & Water Show

The Milwaukee Air & Water Show, presented by WaterStone Bank, is unique in Milwaukee’s history and provides affordable, wholesome entertainment for the entire family. From its grassroots beginnings in 2002, the air show has grown into Wisconsin’s largest free event, providing a substantial economic impact to Milwaukee’s local economy. The Milwaukee Air & Water Show is Milwaukee’s masterpiece of sound and color that showcases the role of aviation in the community, the history of air power, provides a forum for educating young people about aviation, and encourages the natural excitement these upcoming generations have for flight. For more information, visit www.mkeairwatershow.com.