Michael Screnock Gets 38% of His Money From Republican Party; Dallet Gets 0% of Her Money From Democratic Party

Michael Screnock’s $345,000 Five Times What Any Wisconsin Supreme Court Candidate Has Taken From Any Political Party

MADISON, Wis. — Former Scott Walker attorney Michael Screnock has taken an unprecedented 38 percent of his campaign money from the Republican Party for his race for a seat on the non-partisan Wisconsin Supreme Court. The $345,031 in Republican Party money is five times more than any Wisconsin Supreme Court candidate has ever taken from a political party.

His opponent in the race, Judge Rebecca Dallet has taken $0 from the Democratic Party of Wisconsin.

“Michael Screnock is bought and paid for by the Republican Party in a way no other candidate has in the history of the state,” said Scot Ross, One Wisconsin Now Executive Director. “Scott Walker has created a constitutional crisis by canceling elections and if Michael Screnock is on the Supreme Court he will be a rubber stamp for Walker’s total lawlessness.” 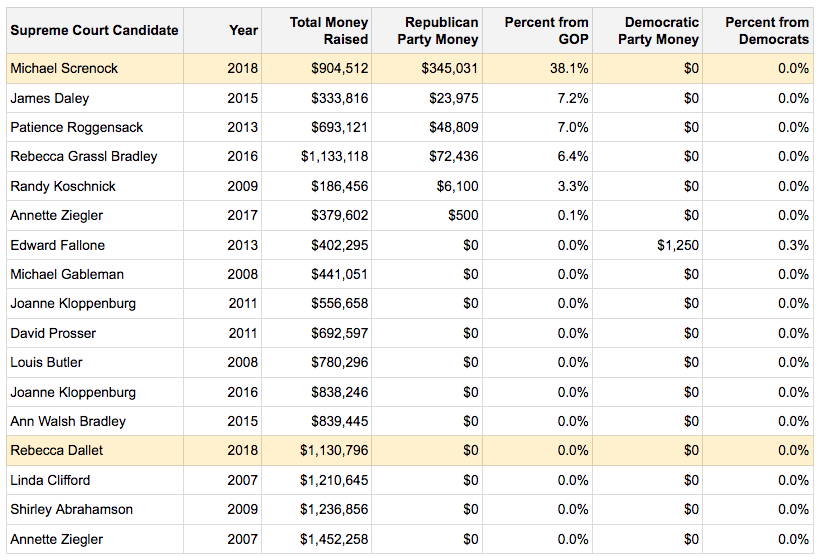 “Michael Screnock is an extremist who was arrested twice for physically blocking women at abortion clinics, who has pledged loyalty to the NRA over the safety of our children and who is making homophobic attacks on his opponent,” said Ross. “Just when you think Trump has bottomed things out for the Republican Party, Mike Screnock comes along with his shovel to dig deeper.”

Screnock is benefitting from $1.5 million in spending from the Wisconsin Manufacturers and Commerce and Screnock was endorsed by the National Rifle Association within hours of the Parkland, Florida shooting that has prompted protests against the NRA across Wisconsin and the country.

3 thoughts on “Michael Screnock Gets 38% of His Money From Republican Party; Dallet Gets 0% of Her Money From Democratic Party”