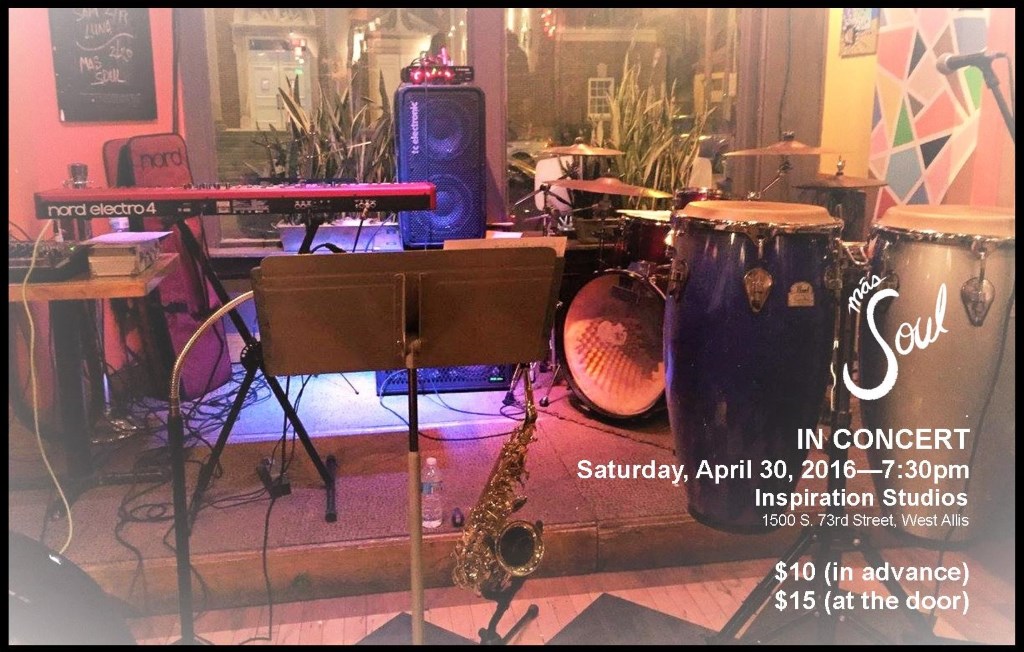 Theirs is a collaboration that has taken two years to come to fruition. Join Más Soul‘s varied and intricate musical styles during their debut concert at Inspiration Studios on Saturday, April 30, 7:30pm.

Drawing inspiration from many sources, Más Soul is a Milwaukee-born fusion cover band that plays tunes from genres such as reggae, Latin, jazz, pop, Afro-Caribbean, and light rock.

Amauris Sandoval is the driving force behind Más Soul. Vocals and intricate conga rhythms demonstrate a lifetime of musical experience.

“I used to sing old folk and salsa music with my aunt who was a singer,” recalls Sandoval. “In my teen years, I developed an interest in hip hop and other, more modern music. I’ve always been a singer, but about 8 years ago, I met Cecil Negron who introduced me to the congas. After taking some lessons from him, I was hooked on poly-rhythms. I took off and made them my own.”

While searching for musicians to create a band a couple of years ago, Sandoval discovered the talents of keyboard player, Matt Foth, at a local jazz jam session. Their combined years of musical experience helped them locate other talented individuals who would commit to this project.

“As the bassist for Más Soul, I have played in many blues, cover and original bands from Denver, Dallas, and Dayton,” says Ralph Fahrbach, whose basement studio is used for rehearsals. “I’ve played on and off for about 25 years and am finally getting back into performance. By far this is the most talented group of musicians I have ever performed with.”

Saxophone player, Elyse Weitzman introduced herself to Sandoval and Foth at a swing dance event.  “I studied piano as a kid and then found alto sax was my true calling,” says Weitzman. “My parents were a great source of inspiration for me, encouraging me to learn to play flute. When I met these guys, they invited me to a rehearsal. I’ve been with the band ever since.” Weitzman blends vocals with Sandoval and rounds out the band’s sultry sounds with her saxophone and flute runs. “I love these guys,” she says with a smile. “They provide the motivation I need to improvise with my instruments and especially to sing, something I have always wanted to do.”

Milwaukee High School of the Arts graduate, Warren Crawford, has played drums since he was a child. He lends his rhythmic precision and expertise to the band’s wide variety of musical styles, but his Midwest soul cherishes the R&B sounds.

Featured guitarist, Adam Speck, holds music degrees from Northern Illinois University and Ball State University.  He is an educator, arranger, and songwriter, with several original recordings on his website.

Sandoval’s love of music fuels his musical journey, which coincidentally is the given name of his daughter—Journey.  “Music is very personal to me,” explains Sandoval. “It is my therapy, my home away from home.  And I don’t want us to be the same juke box that I hear at most local jazz jam sessions.  We definitely cover some of the same songs, but we perform them in our own way, with our spice, our own interpretations. That might include performing the song in Spanish as well as English. That’s the premise behind our name, Más Soul:  our way, our form.”

Additional information about Más Soul is available at www.reverbnation.com/massoul or at the Inspiration Studios website:  www.inspirationstudiosgallery.com.

Inspiration Studios opened its doors to the West Allis community on March 1, 2014, with the intention of providing varied styles of art and theatre to the broader community, focusing particularly on the emergence of new artists and their works