Medeiros studies a major factor that separates man from machine. 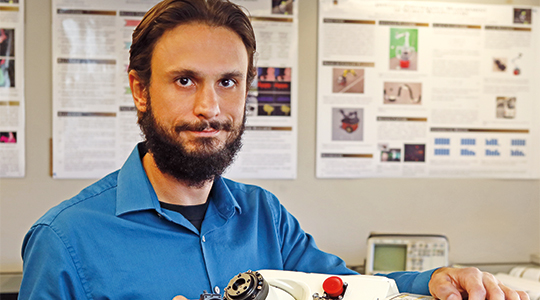 Medeiros studies a major factor that separates man from machine.

Humans, equipped with advanced visual perception, can make sophisticated inferences about their environment with virtually no effort. Machines, designed to perform specialized tasks, struggle to visualize dynamic and complex environments. Medeiros sees the ability to understand dynamic environments with computer vision as the key to further advancement in automation.

Using his background as a research scientist at the School of Electrical and Computer Engineering at Purdue University and the chief technology officer of Spensa Technologies, Medeiros is leading a national effort to advance computer vision that will allow automated intelligence, object recognition and tracking to grow. This technology is useful in a broad spectrum of applications, from airport security to agriculture to manufacturing.

At Marquette, Medeiros has attracted over $1 million in extramural research funding, has published nine peer-reviewed journal articles and has mentored seven master’s and three doctoral students.

“Dr. Medeiros is a leading researcher in our college as well as in the university. His research is a top priority for both the university and college as we commit significant funds and personnel to building world-class research programs in automation, artificial intelligence, data analytics, visualization and smart infrastructure,” says Dr. Kristina Ropella, Opus Dean of the Opus College of Engineering.

Medeiros’ research and innovation will continue to be vital at Marquette and around the world, as smart living and work environments, automated vehicles and machinery, robotics and security systems continue to develop.