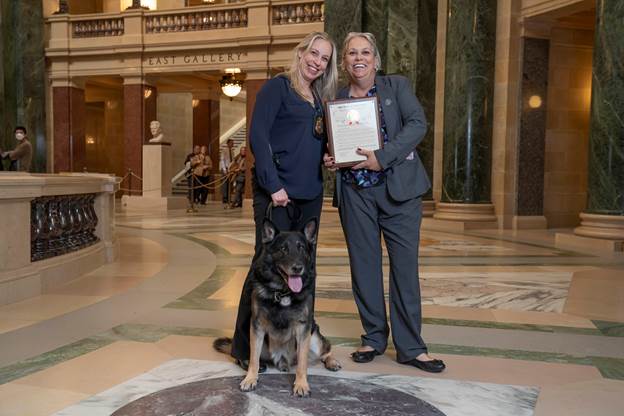 State Rep. Christine Sinicki (D-Milwaukee) presented Detective Holly McManus and K9 Bane of the St. Francis Police Department (SFPD) with the First Responder of the Year Award for the 20th Assembly District at the First Responder recognition ceremony at the State Capitol on Tuesday.

K9 Bane was the SFPD’s first canine officer. He began his career with the SFPD in 2014 and retired from the department in 2020. Detective McManus, K9 Bane’s partner, helped launch the K-9 Officer program.

During his career with Detective McManus, K9 Bane assisted with 51 high-risk tactical warrants and 72 building searches in which he was the often the first officer to enter the structure. In addition, K9 Bane responded to 560 calls for assistance that were directly responsible for the arrest of 220 offenders, mutual aid assistance to 174 individuals, recovery of $63,074 in suspected drug money, and more.

“While they worked on the St. Francis Police Department together, Detective McManus and K9 Bane were instrumental in helping to improve the safety, well-being, and happiness of St. Francis residents,” Sinicki said. “This brave team served the City of St. Francis honorably, and consistently went above and beyond what was required of them for the betterment of the community.”

In addition to receiving the 2021 First Responder of the Year Award, K9 Bane and Detective McManus have been recognized by the FBI for their three years as federal task force members assisting in 36 tactical missions, as well as by the Wisconsin Law Enforcement Canine Handler Association, which awarded them the “Meritorious Narcotic Find” Award.

“First Responders like Detective McManus and K9 Bane are so deserving of our gratitude,” concluded Sinicki. “I am deeply thankful for all the dedicated First Responders, including our invaluable canine officers, across the state who work tirelessly to keep our loved ones and communities safe.”

"I believe that this bipartisan bill will be good for Milwaukee and communities across the state."

"We vigorously call upon Attorney General Schimel to act immediately on these complaints and back-up his claim that DOJ is an environmental enforcer."

"The Craft/Vendor Fair will be held just in time for the holidays at Deer Creek Intermediate School on Saturday, October 21st from 9AM to 3PM."