Holmes and Watson follows Dr. Watson when he’s called upon to disprove the many frauds, fakes, and charlatans who have popped up all over the world claiming to be Sherlock Holmes following his “death” at Reichenbach Falls. Watson travels to a remote mental asylum where three men have recently been admitted, each claiming to be the late detective and matching his physical description. Watson must confront the men and figure out which one is the real Holmes. This thrilling new drama, by the celebrated writer of the movies Mr. Holmes and Stage Beauty, is next up in our series of popular mysteries like The Mousetrap and The 39 Steps.

Holmes and Watson begins performances November 14 and runs through December 17 in the Quadracci Powerhouse. Opening night is set for Friday, November 17 at 8pm. Tickets can be purchased online at www.MilwaukeeRep.com, by phone at 414-224-9490 or in person at the Ticket Office (108 E. Wells Street).

Holmes and Watson is sponsored by PNC Bank with Executive Producers Greg and Rhonda Oberland and Associate Producer Four-Four Foundation, Inc.  The Rep is sponsored in part by The United Performing Arts Fund. 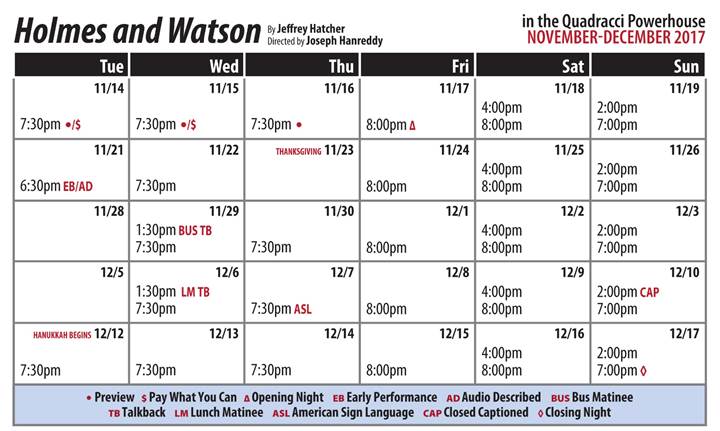 Rep-in-Depth: a pre-show conversation with a member of the cast or creative team.   Rep-in-Depth occurs approximately 45 minutes before curtain for every performance.

TalkBacks: a discussion with members of the cast and artistic team following the 2pm performance on the following Wednesdays November 29 and December 6.

For more information on these events please visit: https://www.MilwaukeeRep.com/Tickets–Events/Events/

Audio-Described Performance: Tuesday, November 21, at 6:30 pm – the show will be described for patrons who are blind or have low vision.

American Sign Language Interpreted Performance: Thursday, December 7, at 7:30 pm – the show will be signed for patrons who are deaf or have low hearing.

Captioned Theater Performance: Sunday, December 10, at 2pm. Performance features a screen to the side of the stage displaying the actors’ lines are they are spoken.

Partnered with the Wisconsin Veterans Chamber of Commerce, enjoy a performance of Holmes and Watson followed by a Panel discussion titled “Dr. Watson Is a Vet?! Representation of Veterans in the Media.”