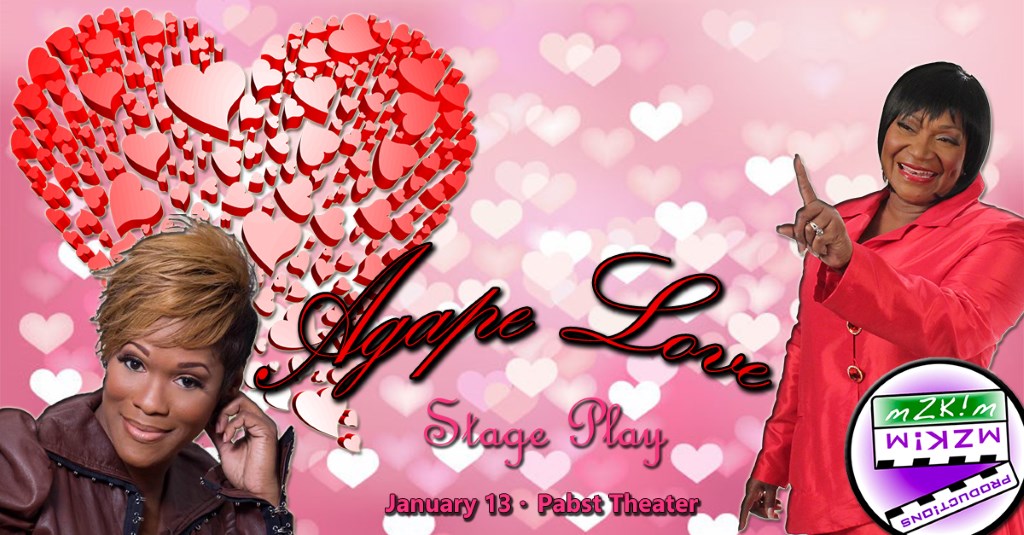 The 2018 Pabst Theater season kicks off with the highly anticipated stage play “Agape Love,” produced and directed by Mz Kim Productions duo Kimberley T. Zulkowski and Stephen Gregory Curtis. Located at 144 E. Wells St. in Milwaukee, WI 53202, on Sat., Jan. 13, 2018 at 6 pm, doors will open for a night where award-winning artists will share the stage with Milwaukee’s very own budding talent, handpicked from the 53206 zip code. All talent will walk the formal, red carpet at 5 pm with the show to follow promptly at 7 pm.

Agape Love Synopsis: Pastor Agape is the most passionate and entertaining preacher around. But he is unaware that he’s prideful, self-serving, and leading his church down the wrong path. One day Agape meets a mysterious, reverent young man, Freeman, who fervently tries to show Agape that he must change his ways. Freeman shows him how far he has turned from the man of God that he once was, but Agape is resistant and the saints of the church are furiously unwelcoming to Freeman. Eventually, the message gets through to Agape and he vows to change his ways, even if it kills him.

Chock-full of comedy, singing, and praise, “Agape Love” is sure to take its guests down memory lane with its old-school gospel singing and preaching and new school contemporary praise and worship. An experience to remember will be had by all, as this one-of-a-kind cast will be seen for the first time together in the heart of Milwaukee, before traveling with the production through the South later this year.

Tickets can be purchased at http://event.etix.com/ticket/online/performanceSale.do?performance_id=8184893&partner_id=240&method=restoreToken&cobrand=pabst