"Tonette and I are saddened to hear of the passing of Senator Mike Ellis." 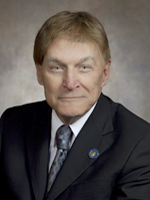 Mike Ellis. Photo from the State of Wisconsin.

“Tonette and I are saddened to hear of the passing of Senator Mike Ellis. He was a giant in the Legislature and a bigger-than-life personality in Wisconsin politics. I enjoyed serving with him as a lawmaker and as governor. We were just on the radio together recently and I love his wit and passion. He will be missed by so many of us. Tonette and I send our prayers to his entire family.”

Governor Walker will be ordering flags to half-staff for the day of service. An executive order is forthcoming.