Senate Bill 209 – relates to the appropriation of funds to construct a sports and entertainment arena and related facilities in Milwaukee.

Senate Bill 209 – relates to the appropriation of funds to construct a sports and entertainment arena and related facilities in Milwaukee.  This legislation allocates $80 million state dollars over the next 20 years toward the construction of a new arena in downtown Milwaukee. The investment protects the current $6.5 million Wisconsin receives annually from income taxes related to the Bucks and NBA, as well as future increases in those revenues for state taxpayers.  Predictions expect the state to receive a 3-to-1 return on each dollar invested in this project over the next 20 years.  The legislation passed the Senate by a vote of 21-10 and the Assembly by a vote of 52-34; it is Act 60.

“This is a great day for the city of Milwaukee and taxpayers across the state,” Governor Walker said.  “For every dollar the state is investing in this project, state taxpayers will get a $3 return through income tax revenue.  In addition, by working together on this private/public plan, we have protected our hard-working taxpayers against the major loss in tax revenue that was inevitable had we failed to reach an agreement.” 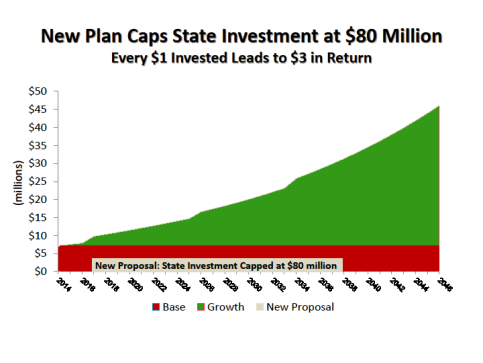 The proposed arena is estimated to cost $500 million and is part of a roughly $1 billion in economic development projects in downtown Milwaukee, which is estimated to create or preserve roughly 15,000 permanent and temporary construction jobs.   The current and former ownership have committed to fund $250 million toward funding the arena.   Local governments will fund the remainder of the investment through infrastructure investment, direct funding, and financing through the Wisconsin Center District.