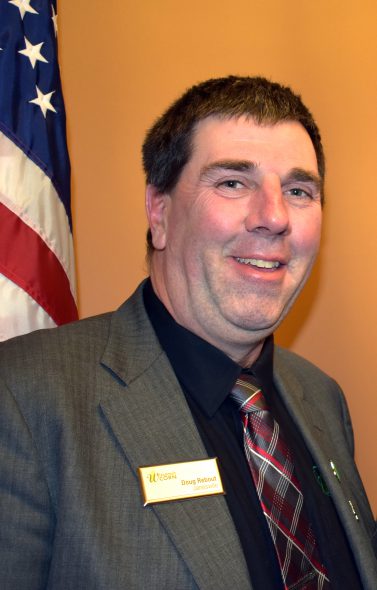 Doug Rebout. Photo from the State of Wisconsin.

MADISON – Gov. Tony Evers today announced the appointment of Doug Rebout to the Wisconsin Department of Agriculture, Trade and Consumer Protection (DATCP) Board. Rebout is a partner in Roger Rebout & Sons Farms near Janesville. The farm includes over 4,200 acres of cropland, 280 Holstein and crossbred steers, and 400 custom-raised heifers. Rebout is actively engaged in public and community service, currently serving as the president of the Wisconsin Corn Growers Association and as a member of the Governor’s Task Force on Climate Change.

“From trade wars to difficult weather to a global pandemic, Wisconsin farmers have persevered through many challenges in the past several years. Doug is not only familiar with those challenges, but he is an advocate for productive solutions,” said Gov. Evers. “I am proud to appoint Doug to serve on the DATCP Board.”

The DATCP Board is comprised of citizen members appointed by the governor and confirmed by the Legislature. Board members serve on the policy-making body in six-year terms.

“As a family farmer in southern Wisconsin and a strong voice for our state’s diverse agriculture industry, Doug brings a valuable perspective to the DATCP Board. I look forward to working with him in this new capacity,” added DATCP Secretary-designee Randy Romanski.

“I am humbled and honored that the governor has asked me to serve on the DATCP Board,” stated Rebout. “I look forward to joining my fellow board members in serving Wisconsin’s agriculture, trade, and consumer protection communities.”