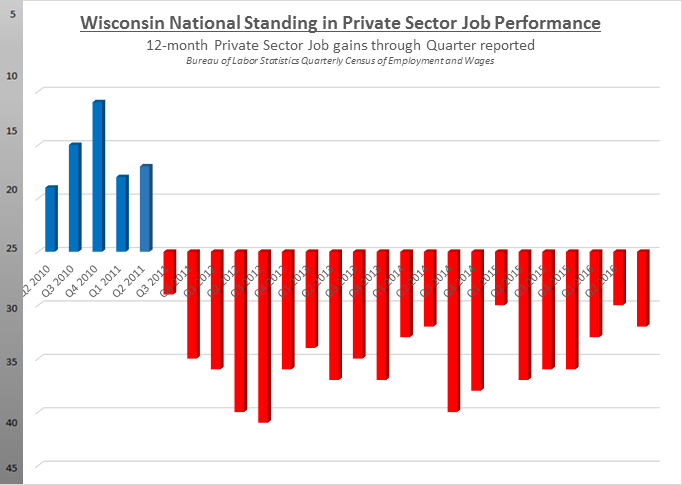 “These dismal job numbers demonstrate why the majority of Wisconsin families believe Gov. Walker’s agenda is taking our state in the wrong direction,” Senate Democratic Leader Jennifer Shilling (D-La Crosse) said. “The Republican plan to take away health care coverage, outsource jobs and delay construction projects is having a devastating impact on our economy. We need a budget that restores funding for local schools, invests in worker training and improves the safety of our roads and bridges.”

The Bureau of Labor Statistics Quarterly Census of Employment and Wages data released today showed Wisconsin ranked 32nd nationally in 12-month private sector job creation. Wisconsin, which had outperformed the national average for five consecutive quarters before the first GOP budget passed in 2011, has trailed the nation for more than five years under the economic agenda of Gov. Walker and Legislative Republicans.

“For six years the rich have been a priority at the expense of taxpayers who work for a living.  That simply isn’t getting the job done,” Assistant Democratic Leader Janet Bewley (D-Mason) said. “Wisconsin has fallen further behind the nation — and worse yet workers are now forced to pay for a handout to insiders despite the fact that manufacturing jobs are being cut.”

The manufacturing tax credit took full effect in January of 2016, and does not require any job creation for the payout. Despite the loss of 4,034 jobs reported today, Shilling and Bewley pointed out the workers will be forced to pay hundreds of millions to wealthy investors who benefit from Republican tax giveaways that result in fewer jobs.

One thought on “GOP Agenda is Failing Wisconsin Families”