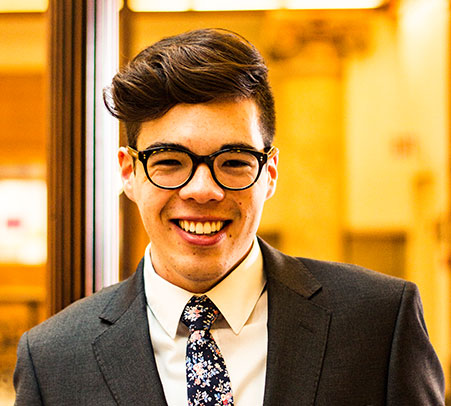 Yeager interned for Milwaukee Downtown since moving from his hometown of Rochester, Minnesota in 2014 to attend the University of Wisconsin-Milwaukee’s School of Architecture and Urban Planning. He was then promoted to Downtown Environment Specialist.

Gabriel’s deep-rooted passion for downtown revitalization was apparent at a young age — a very young age, in fact, as he modified his battery-powered four-wheeler into a street sweeper.

Yeager’s more recent projects include managing a portfolio of public realm improvements for Old World Third Street and Postman Square, as well as commissioning some of the city’s largest murals including “Heart & Sol,” “Westown in Bloom,” “Migration,” and a dozen utility box murals, all of which have totaled $118,500 to support the arts.

“He sleeps, eats and breathes downtown revitalization, and that passion will lead both new and current projects to insurmountable success,” says Beth Weirick, CEO of Milwaukee Downtown, BID #21.

CNU Wisconsin encourages the adoption of principles and practices of the New Urbanism to support the restoration of existing urban centers and towns, the reconfiguration of sprawling suburbs into communities of real neighborhoods and diverse districts, the conservation of natural areas, and the preservation of our built legacy. CNU Wisconsin is an affiliated Chapter of Congress for the New Urbanism, located in Washington, D.C.