MADISON — The latest Wisconsin Republican to decline to challenge U.S. Sen. Tammy Baldwin, hedge fund manager and 2012 GOP U.S. Senate candidate Eric Hovde definitively announced on UpFront with Mike Gousha that he is not running for Wisconsin’s Republican U.S. Senate nomination in 2018.
It’s easy to see why Hovde’s taking a pass. The GOP primary has to-date been characterized by deeply personal and petty attacks, lobbed back and forth by Kevin Nicholson and Leah Vukmir‘s campaign staff, family members, the candidates, themselves, and even the Walker family.

It says it all that even a fiercely negative campaigner like Hovde wants to avoid a run. Still, Hovde isn’t staying out of the race entirely — though he’s not endorsing as of yet, Hovde did use his UpFront interview to take a swipe at Nicholson:

“Kevin, I just don’t know that well,” Hovde warned, “There are some issues that cause me a bit of concern.”

And why wouldn’t Wisconsin Republicans be worried about Kevin Nicholson? Nicholson can’t seem to tell the truth and he wouldn’t even be a contender for the Republican nomination were he not propped up by “nearly $5 million” from right-wing outside groups bankrolled by Illinois billionaire Dick Uihlein.

“It’s a real testament to how nasty this GOP primary has become that yet another prominent Wisconsin Republican — this time famously-aggressive campaigner Eric Hovde — is declining to throw their hat in the ring,” said Brad Bainum, DPW spokesperson for the 2018 Senate race. “But this doesn’t change much: Leah Vukmir and Kevin Nicholson will continue their brutally negative campaigns as right-wing candidates promising to sell out Wisconsin’s working families in order to help corporate special interests get even richer.” 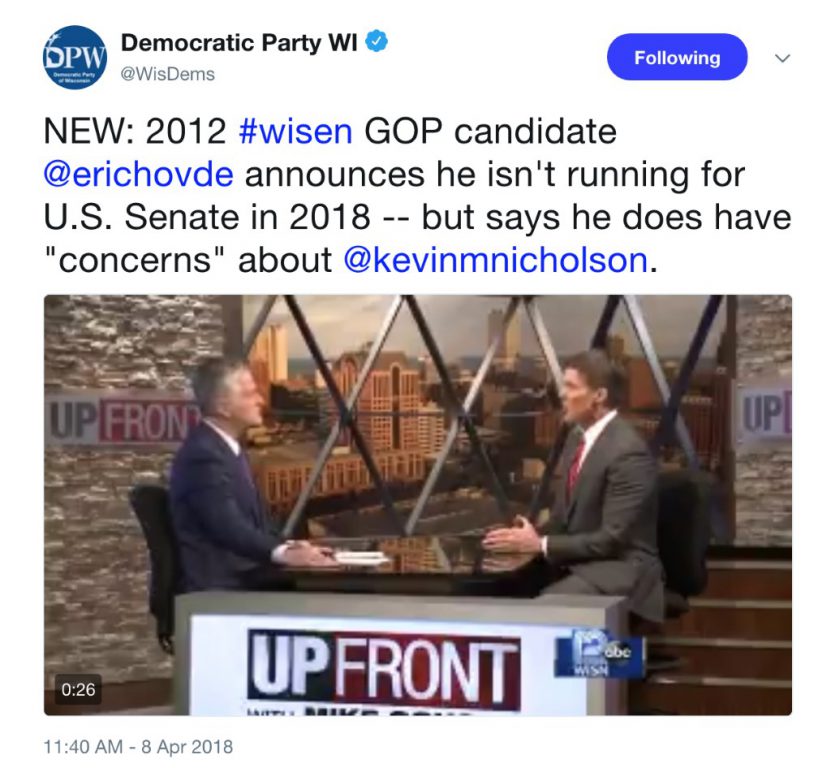 NEW: 2012 #wisen GOP candidate @erichovde announces he isn’t running for U.S. Senate in 2018 — but says he does have “concerns” about @kevinmnicholson