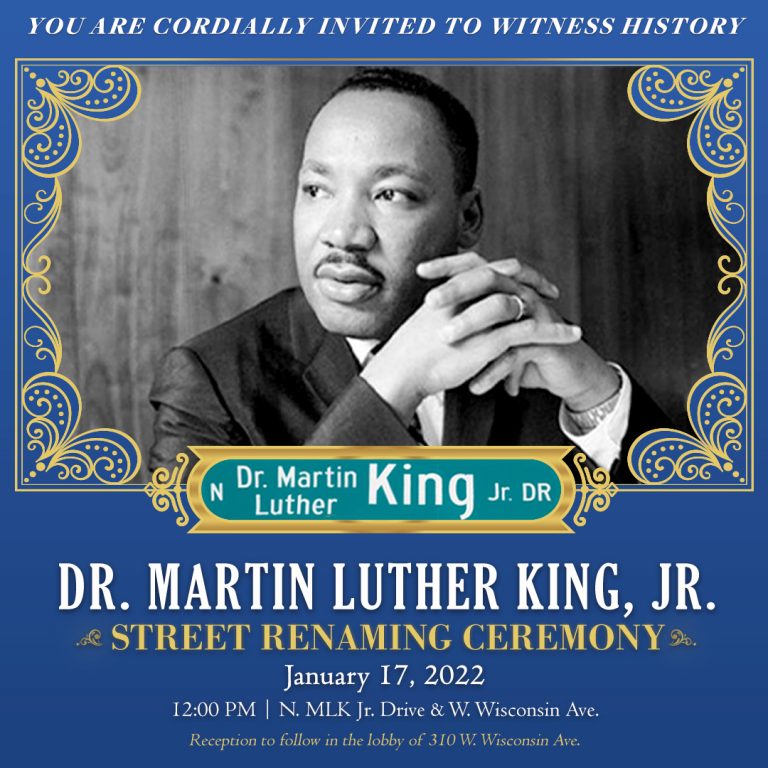 It was in 1984 that the Common Council voted 13-3 to rename 3rd Street, but chose to name the section from Wisconsin Avenue north to McKinley as North Old World Third Street, and from McKinley to West Capitol Drive, 3rd Street was renamed in honor of Doctor King. The decision at the time was marked by political fighting and racially charged discussions.

Earlier this year in an effort led by Alderwoman Coggs to create a more equitable city, the Common Council unanimously sponsored and passed an ordinance renaming Old World Third Street, from West McKinley Avenue to West Wisconsin Avenue, North Dr. Martin Luther King Jr. Drive. “This historical moment has been a long time in the making as we have worked to honor and respect Doctor King’s legacy while changing the direction and trajectory of this city as it relates to racial equity and social justice,” Alderwoman Coggs said. “There needs to be one King Drive that connects us all, and I want to thank the community partners, businesses, elected officials, city staff and other stakeholders who have helped make this a reality.”

Alderman Bauman whose district includes much of the street renaming shares the sentiment. “This change has been long overdue, and I am glad that all the stakeholders could rally behind this proposal that will bring continuity and unity to Milwaukee.”

The event on Jan. 17 is open to the public and will include a brief outdoor ceremony followed by a reception in the lobby of 310 W. Wisconsin Ave.

6th District Difference Makers Honored for Efforts in the Community

The awards are meant to recognize those people and groups who go above and beyond to improve the quality of life in the 6th Aldermanic District.

Event will include announcement of 2021 Difference Makers Award winners