Several other MCTS Drivers and Transit Security Officers have also come to the aid of lost or missing children over the years. 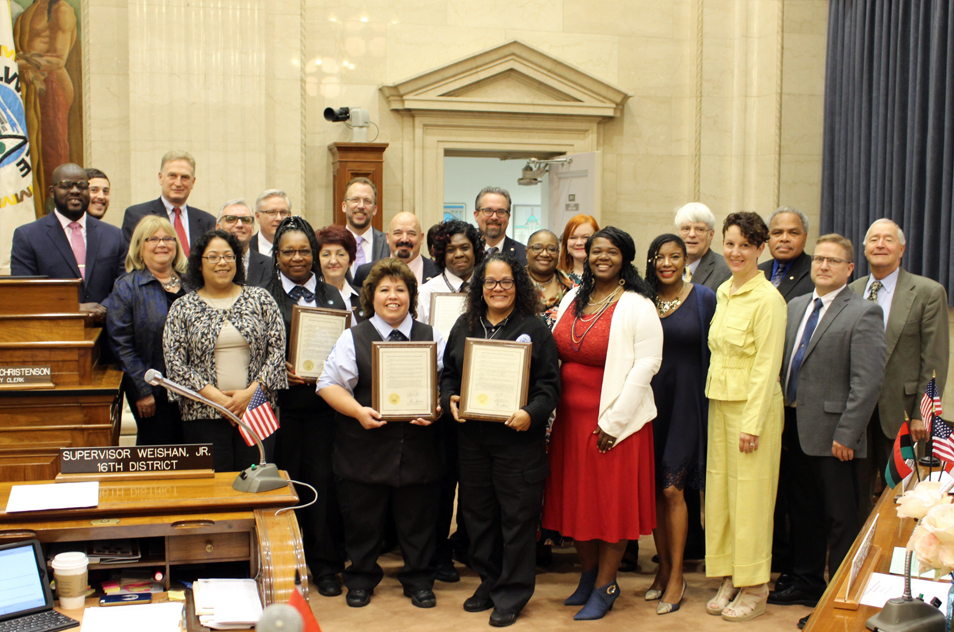 MILWAUKEE (June 20, 2019) — Seven Milwaukee County Transit System bus drivers who have helped find lost or missing children in recent years are being honored by the Milwaukee County Board of Supervisors.

The County Board invited the MCTS employees to its meeting on June 20, 2019, to present them with awards recognizing their heroic and compassionate actions while behind the wheel.

In May 2019, MCTS Driver Cecilia Nation-Gardner stopped her bus near 35th and Vliet streets to help a little boy who she spotted running through traffic. It turns out the six-year-old, who has a disability, had wandered away from school unnoticed.

MCTS Driver Irena Ivic was driving at 4th and Mitchell on a cold day in December 2018 when she saw a baby girl, barefoot and in a diaper, wandering alone. She scooped up the child and carried her to the safety of her bus.

MCTS Driver Chris Feezor called for help late one night in September 2018 after he came across a small child wandering a neighborhood unattended. Chris pulled over and stayed with the child until officers arrived.

MCTS Driver Diana Serrano was driving on Lapham Boulevard near I-43 in August 2018 when she saw a toddler in the street wearing only a t-shirt and underwear. As she waited for police to arrive, Diana comforted the girl by talking to her softly and showing her photos of puppies.

MCTS Driver Karen Martinez-Casper was driving along Route 80 on a chilly morning in October 2017 when she noticed a barefoot boy, shivering and alone. She carried the scared child to her bus and waited for police to arrive.

Former MCTS Driver Duane Butler, who is now retired, was driving Route 27 in July 2017 when he saw a two-year-old boy standing outside in slippers all by himself. Duane pulled over and worked with a passenger to bring the boy to safety. Police later learned that the child left his house while his mother was sleeping.

Former MCTS Driver Jeannie Mitchell, who is now a Route Supervisor, was driving in October 2016 when she saw two young children walking alone near Hopkins and Hampton. Police say the five-year-old girl and one-year-old boy had walked away from their babysitter and became lost while trying to find a relative’s house.

Several other MCTS Drivers and Transit Security Officers have also come to the aid of lost or missing children over the years. We thank them – and every member of the MCTS team – for their dedication, vigilance and compassion.

“The work our bus drivers take on is challenging, it is demanding, and it makes a big difference in the lives of residents in Milwaukee County,” said Milwaukee County Executive Chris Abele. “Thank you to the seven bus drivers being honored today, and to the many MCTS bus drivers who go above and beyond the call of duty to ensure riders can get to work, school, home and destinations all across our great county every day.”

The MCTS Excellence program is an innovative way to recognize MCTS employees for their extraordinary work. The initiative includes a popular video series, in which bus surveillance video is used to tell incredible stories that might not otherwise get told. Hundreds of millions of people around the globe have viewed or read about MCTS employees’ inspiring actions thanks to the broad reach of social media, TV, radio and newspapers.