Competition Play “Facing the Finding: A Mirror in Three Acts” to be Previewed at Inspiration Studios

Audiences will be asked to provide valuable feedback to the cast and crew. 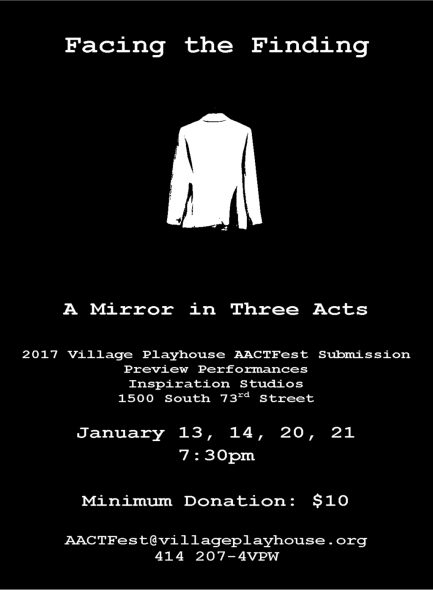 Facing the Finding: A Mirror in Three Acts

This February, the Village Playhouse will participate in the Wisconsin AACTFest 2017, a state level competition of one-act plays taking place in Stephens Point. Milwaukee area audiences will have the opportunity to preview the performance of this year’s entry, an original play titled, Facing the Finding: A Mirror in Three Acts. All performances will be at 7:30pm on January 13-14 and January 20-21 at Inspiration Studios in West Allis. Audiences will be asked to provide valuable feedback to the cast and crew immediately after the performance stating what worked and what didn’t work.

The playwrights, Sabley Sabin and Mark D. Wyss, were chosen because of their very different voices. While this presented challenges in terms of defining the production as a cohesive unit, it has yielded rich and diverse variations on the common themes. Sabin is a poet, author of “keeping my head out of my uterus: a perimenopausal pensee” and playwright of the 2014 three act play, “everyone’s stories are true.” Wyss, former CFO of West Allis, is an award-winning author of twenty short plays which have been produced throughout the country, serves on the board of Walkers Point Center for the Arts, and runs Sandmark22 Productions with his wife, Sandra.

Sabin and Wyss drafted scripts inspired by their own ideas, their observations during the actors’ workshop, and discussion of the themes that were addressed.

“In this complex time, in the aftermath of a heated and controversial presidential campaign, many of us are bruised, bewildered, or just plain angry,” says Fielek.“It’s easier, often, to stay in this anger, to direct it at an external enemy. But that’s not the way we move forward. Change will come only when we turn the mirror around; when we face the darkness, bias and fear in ourselves, come to recognize it, then work through it…to the hope on the other side.This play is a call to do just that.”

In the show’s opener, “prepare to enter,” Sabin presents three short scenes in which the characters embrace hope through vulnerability. Ever true to her poetic style, Sabin’s words are carefully chosen to conjure the emotions of everyday life and offer hope for the hopeless.

In Sabin’s “Bearing Witness,” Mindy Lentz shares intimate thoughts after surviving a car accident, “…it takes skill to turn the mind toward gratitude in the face of adversity and shock.  It requires the capacity to rest in the moment, to stay in the car and feel lucky, to organize your thoughts into: thank you for not hitting me and is everyone okay?  But there are powerful forces at work: stimulus and response without a breath in between and everything we drag with us every day, the relentlessness of moving forward and anger.  And anger is so many things…”

Wyss’ J. McCarthy vs. the Aliens: An Alternative History incorporates quotes from Joseph McCarthy, Edward R. Murrow and others, drawing a comparison between the anti-Communist Red Scare of the 1950s and the 2016 presidential race, weaving in some of the most colorful quotes from both candidates and provoking additional thought by setting the play in the recent past. It features Mary Ferwerda as Josephine McCarthy and Jordyn Stewart as her right hand, Rhonda Cohn. This segment ends with a quote from Edward R. Murrow (Erico Ortiz), entreating the audience to resist being “driven by fear into an age of unreason.”

“The blazer in the production poster represents the armor of cynicism, hubris and fear we sometimes wrap around ourselves,” explains Fielek, “keeping ourselves from being reached, or from growing.  Every cast member will wear a blazer for Mark Wyss’ McCarthy hearings.  Without the blazers, Sabin’s characters face what’s broken without armor…and with hope.  They remind the audience that we all have to recognize the cynicism, pride or fear that we carry—we all carry them—but we don’t have to put them on.”

Sabin’s culminating piece, “link to disparate parts,” points out that we’re all carrying something extra but that we are in this together. Though the climate continues to be uncertain and full of fear and strife, we can “take a deep breath and step together into whatever comes next.”