JANESVILLE, WI – Cathy Myers, a 24-year high school teacher and two-term Janesville School Board member, is facing Randy “Iron Stache” Bryce in the Democratic Primary in Wisconsin’s First District for the right to take on Paul Ryan next November.

Today, Cathy Myers demanded that Bryce apologize for a series of tweets targeting Ivanka Trump, which she described as “degrading to all women.” On Sunday, Bryce tweeted: 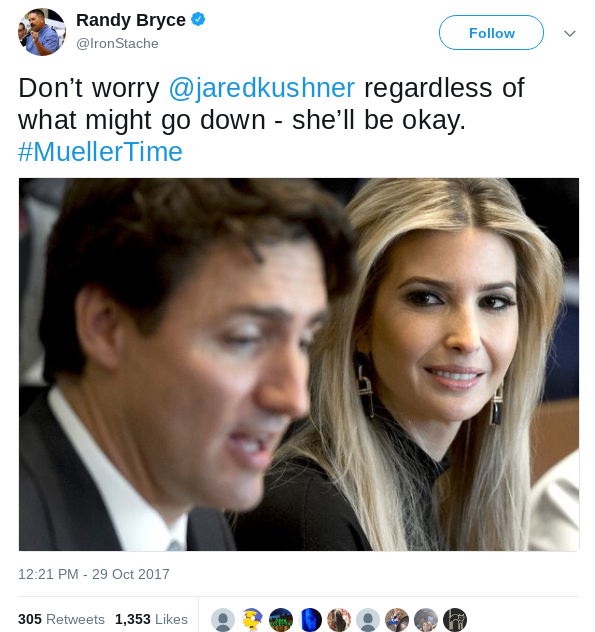 Cathy Myers responded by referencing a prior tweet Bryce aimed at Ivanka Trump that she felt was out-of-bounds: 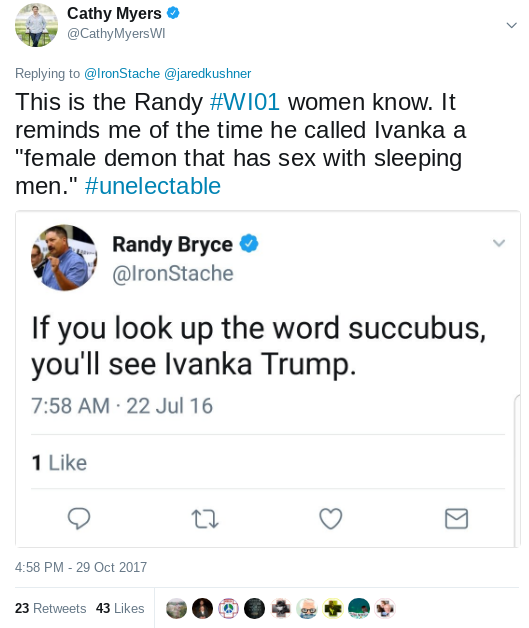 Cathy Myers is demanding that her opponent delete the tweets immediately, apologize, and reflect on the implicit bias at the root of his misogynistic comments.” She tweeted: 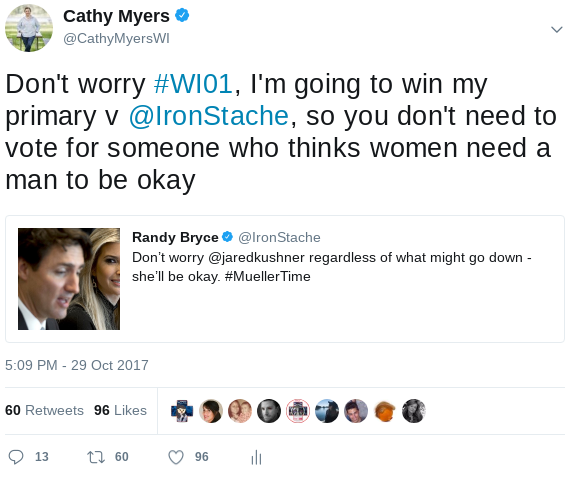 When asked by the Milwaukee Journal-Sentinel for a response, Bryce refused to acknowledge his primary opponent’s criticism.

Cathy Myers questioned whether Bryce understands how his comments are offensive to women. “Randy Bryce’s refusal to address this issue shows that he doesn’t understand why his comments are disrespectful to every woman in Wisconsin’s First District. He needs to understand why it’s inappropriate to attack a woman he disagrees with by sexualizing and objectifying her. I won’t stand for it in this race or anywhere else.”

The response to Randy Bryce’s tweet was swift and brutal.  His comment led to calls for Bryce to fire staff, 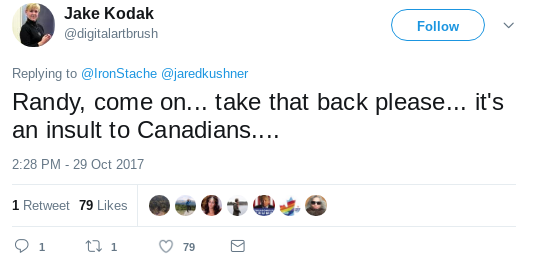 The Democratic Primary in Wisconsin’s First District is on August 14, 2018. Cathy Myers has earned the most local endorsements, but Randy Bryce has received more support from celebrities like Chelsea Handler, Cynthia Nixon, Rosie O’Donnell, and Charlize Theron, who backed him after his announcement video went viral. Regardless, Myers is confident she will be victorious, “Randy Bryce has lost three elections over the past five years, and his lack of respect for women, which is exemplified by these comments, explains why he has proven to be unelectable.”