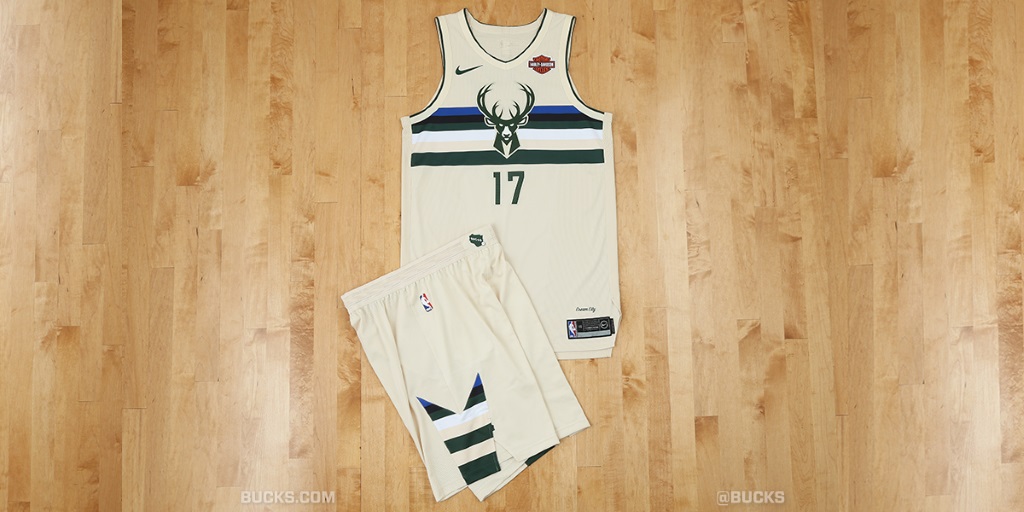 The western edge of Lake Michigan is known for producing some of the coldest winters in the country. It has created a gritty and determined fan base much like the young team it supports. The west coast of Lake Michigan also provides the bricks that have given Milwaukee its Cream City moniker. The cream color comes from the clay found in the Menomonee River Valley and has come to define the architecture of the greater Milwaukee area.

Just as this distinctive clay is the foundation upon which Milwaukee was built, this color is the foundation for the Bucks “Cream City” City Edition uniform, but the uniform draws additional inspiration from the full color palette of the city and surrounding areas. The Cream City rainbow pattern brings to the forefront the blending of the urban landscape with green of Wisconsin’s lush landscapes and blue that pays tribute to Milwaukee’s etymological designation as a “gathering place by the water.” Additionally, there is no escaping the Buck head proudly displayed on the chest of the uniform, while the state of Wisconsin is more subtly used as the belt buckle graphic.

Milwaukee’s “Cream City” moniker is printed on the jersey near the player tag, using a custom script that combines the look of both the current, industrial, MB Varsity Bold and the script font that once adorned the front of Bucks jerseys of the past. The shorts, while keeping with the clean look of the remainder of the Bucks’ uniform sets, carries over the negative space “M” from the Icon and Association editions, but utilizes the Cream City rainbow to carry the strong tie to Milwaukee through the full uniform.

“Cream City” City Edition jerseys and accompanying retail items will be available at Bucks Pro Shop locations and online at shop.bucks.com starting on Dec. 28. at 10 a.m.