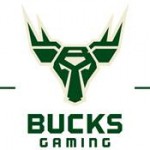 Bucks Gaming selected Lytel “Lotty” Martin with the 18th overall pick before taking Benjamin “Komp” Leal in the second round (37th overall) and Vincent “Big Perm” Valerio in the fourth round (54th overall).