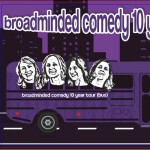 Broadminded goes dutch on their latest sketch comedy show, Half & Half

Half & Half: a sketch comedy running November 3-11

Broadminded goes dutch on their latest sketch comedy show, Half & Half.

Milwaukee, WI (October 1, 2017) – With so many entertainment options, it can be tough to decide how to spend your precious evenings. Thanks to broadminded comedy, you don’t have to choose between comedy shows: their latest original sketch comedy show, Half & Half, will include another sketch comedy group performing alongside the broads. 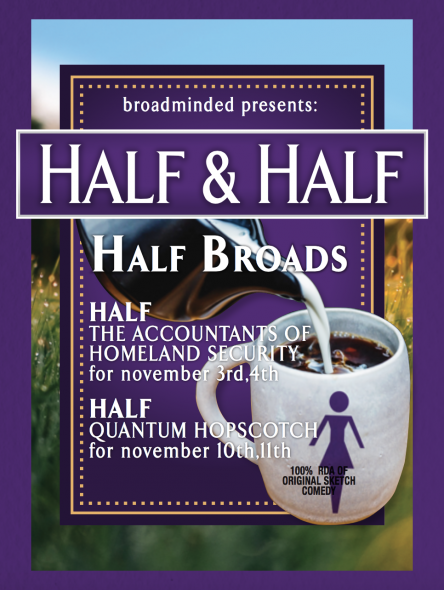 Half the performances (November 3 and 4) will feature Chicago’s The Accountants of Homeland Security. The other half (November 10 and 11) will feature Milwaukee’s Quantum Hopscotch, a new group from Mojo Dojo. All performances will take place at 7:30 pm at the Underground Collaborative, 161 W. Wisconsin Ave., Milwaukee, WI 53203, aka the Lower Level of the Grand Avenue Mall, below TJ Maxx (where you can get great fashion for more than half off retail pricing).

Never been to a sketch comedy show? Expect to see a series of original sketches including ‘blackouts’ that last less than a minute, longer sketches of 5-7 minutes, and even a song or two. Our humor has been called “intelligent yet accessible” and described as a mix of observational humor with “more sophisticated stuff”. Not half bad!

Broadminded is Anne Graff LaDisa, Melissa Kingston, Megan McGee and Stacy Babl. They are half blonde, half city of Milwaukee residents, and half tattooed. Half of the broads can drive stick shift, speak Spanish, and make their own maki rolls. Mel’s eyes are half green and half brown. Megan is 5’6” ½. Stacy once ran a half marathon. Anne once ran a half mile and vomited. Half the broads have worn pajamas to an interview. Just kidding! That was just Mel.

“Half & Half” is produced by Milwaukee Comedy LLC and is appropriate for ages 13 and up. Advance tickets are available at www.broadmindedcomedy.com.  Tickets are $12 in advance and $15 at the door – that’s 50% off the full retail price! What a deal! And if that’s not a enough, a 6-pack of advance tickets, after discount, is $60.