This decline in unit sales is directly related to the decrease in available properties for sale.  Low inventory has plagued the market since mid-2015.

Beginning in September 2014, there have been 27 months of positive sales.  April was one of 5 months in negative territory.  Washington County was the only county with positive sales, coming in 5.4% ahead of April 2016.

Still, the real estate market is performing well from a historical perspective.  The 1,777 sales in April were 10.4% ahead of 2015’s level.

Listings for April were down 1.9% regionally.  Yet, remarkably, listings were up in three of the 4 metropolitan counties.  Nonetheless, since June of 2015 there have only been 5 months of positive listing growth (18 negative, including April).

Subtracting the 2,859 listings with an active offer from current listings presents an effective inventory level of 2.4 months, slightly higher than March’s 2.3 month level.  A year ago, the same calculation showed April’s inventory level at 3.1 months. 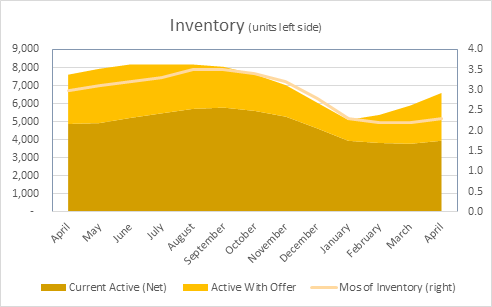 The GMAR surveyed members earlier this week (May 8 – 10) about the market and 66% do not see any signs of inventory increasing during the rest of 2017.  72% of survey respondents would like to see more listings under $300,000.

The Greater Milwaukee Association of REALTORS® is a 4,000-member strong professional organization dedicated to providing information, services and products to “help REALTORS® help their clients” buy and sell real estate.  Data for this report was collected by Metro MLS, Inc. a wholly-owned subsidiary of the GMAR.

* Sales and Listing figures differ between the “Monthly Stats” and “4th qtr” (or year-end) because the collection of “Monthly Stats” ends on the 10th of each month; whereas the “4th qtr” is a continuous tally to 12/31.  For example, if a sale occurred on July 29th, but the agent does not record the sale until August 11th, that sale would not be included in the July sales figures (or any subsequent month’s total) but would be added to the annual total sales figure in the “4th qtr” total.

From grilling the best sliders to creating delicious vegan meals, guests will be inspired to create the perfect summer snacks.