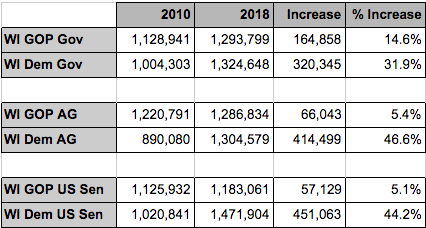 MADISON, Wis. — Republicans in the state legislature may have protected their legislative majorities because of the rigged district lines they drew after taking complete control of state government in 2011, but a closer look at the results of the 2018 midterm elections in Wisconsin confirms that voters delivered a mandate to Democrats who swept every statewide election on the ballot.

“The voters of Wisconsin spoke loud and clear in the midterm elections,” said One Wisconsin Now Executive Director Scot Ross. “They turned out in record numbers and they handed a mandate to the Democrats who swept every statewide race on the ballot.”

Comparing the results of the 2018 elections to 2010, when Scott Walker was elected governor, shows both the raw number of votes won by Democrats and the percentage increase far exceeded the increase for Republicans. For example, between 2010 and 2018 Walker increased his total number of votes by nearly 15 percent. Yet he was handed his first electoral defeat since 1990 on the strength of his Democratic opponent Tony Evers upping the Democratic gubernatorial vote total by nearly 32 percent.

Democratic candidates Josh Kaul and Tammy Baldwin showed gains of over 46 percent and 44 percent respectively in the statewide contests for Attorney General and United States Senate.

Republicans in the legislature were clearly the beneficiaries of rigged district lines they drew for themselves after seizing control of state government in 2011. For example, the GOP candidates for the state Assembly received only 45 percent of all the votes cast in all 99 contests yet they will hold 63 seats in the upcoming 2019 legislative session.