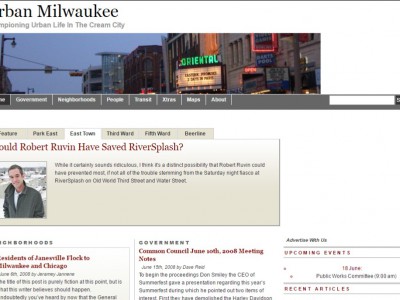 Our annual party is Tuesday, 5 p.m. And oh, the stories we could tell. 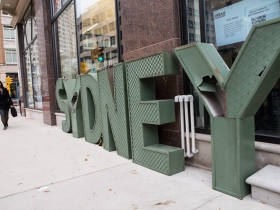 Despite delays, alterations, and setbacks the 160-room Aloft hotel project has finally started to overcome some of these hurdles.

The Residences Above? Nope

Rumors had circulated for weeks regarding the demise of The Residences Above portion of Ruvin Developments’ Aloft hotel project. Indications such as the website for The Residences Above being down for weeks and their sales sign coming down in record time combined with the market’s downturn made it appear likely that a change in the project was coming. As of last week the final decision hadn’t been made regarding the status of the condominiums. At the time Rob Ruvin had indicated that they would “most likely eliminate the condos” and that they would “possibly increase the size” of the hotel but they were still working it out. It appears now that decisions have been made and The Residences Above have been eliminated from the project.

Milwaukee Skyline Originally uploaded by compujeramey Milwaukee County intends to issue a request for proposals (RFP) for a Park East corridor plot of land on the western end of the reclaimed land, near the former Pabst brewery. With developments finally getting off the ground on formerly RFP’ed plots on the eastern end of the corridor, and redevelopment moving full speed ahead at The Brewery it seems logical to move forward at this time and put another plot up for sale. The proposed plot is the one east of 6th Street, north of West Winnebago Street, and south of McKinley Avenue. On the flip side, Robert Ruvin had a harder time securing a loan for his development inbetween 3rd and 4th Streets after the market began to turn. Construction hasn’t even started there yet, and a demo unit is in the works to begin condo sales starting in April. Is it therefore logical to put the chance of another development on the market and potentially damage development going on on other parcels? Yes, well it would be great if the county could let every development get to 100% before triggering another I think it’s important to continue to grease the wheels for other developments to get off the ground. Plus, in all reality by the time the county put out the RFP, it’s going to be at least two years before construction even breaks ground. That will give other developments plenty of time to sell units.. The worst thing that could happen is the current credit crunch could toward around, and for the downtown area to be caught with a lack of available units and development going on. If people want to move downtown, and it appears they do, the county and city should continue to encourage developers to get projects off the ground that produce urban infill and add to the strength of downtown. They’ve done a good job of that so far, and I hope they don’t pull this sale in the event of a market downturn. I expect that further development in the corridor is only going to accelerate the pace of sales and leasing of space, and increase the amount of developers wanting to put up buildings. It’s hard to sell someone on living next to a bunch of gravel lots, but it’s going to be ease to sell them on living amongst a lot of new, pedestrian-friendly developments within walking distance of the city’s best assets.

Milwaukee Ale House, Water Buffalo, etc, etc. Originally uploaded by compujeramey The nation’s third largest independent advertising firm Cramer-Krasselt, who as you may remember was supposed to move to a Robert Ruvin-development in the Park East neighborhood, has announced that they’re moving from Van Buren Street to the Third Ward. The firm will move to a 50,000 square feet location at 224 E Chicago St above Rubin’s Furniture. They will barely gain any space, but will have what they think is a much more efficient layout (what exactly that means they haven’t too clear about, but let’s assume it’s not a cubicle farm). While the move isn’t a sign of improving health for urban Milwaukee, because they’re simply trading one space for another, it does help cement the fact that the creative types are certainly calling the Third Ward home. The bigger question raised is what type of businesses will call the Park East neighborhood home?  Cramer-Krasselt moving into the undeveloped neighborhood certainly would have been a large boost for creative firms, but may not have been as good for the city. The concentration of similar firms seems to be a key ingredient of economic success (see Silicon Valley, Wall Street, or even all the biotech firms in Madison). While for the most part that is seen on a macro level (Silicon Valley is a huge swath of land and includes a few different cities), similar firms locating close to each other in Milwaukee is a strong recruiting tool for each firm and for new startups. It’s going to be a whole lot easier to convince someone from Boston to come to Milwaukee if they know they’re going to be working (and hopefully living) in an area that is filled with like-minded individuals. If they can visit the city and see all the companies in one neighborhood versus being sprinkled all over there will be a lot better first impression made. While the Third Ward continues to draw in creative firms, who will occupy the stretch from the old Pabst brewery eastward?