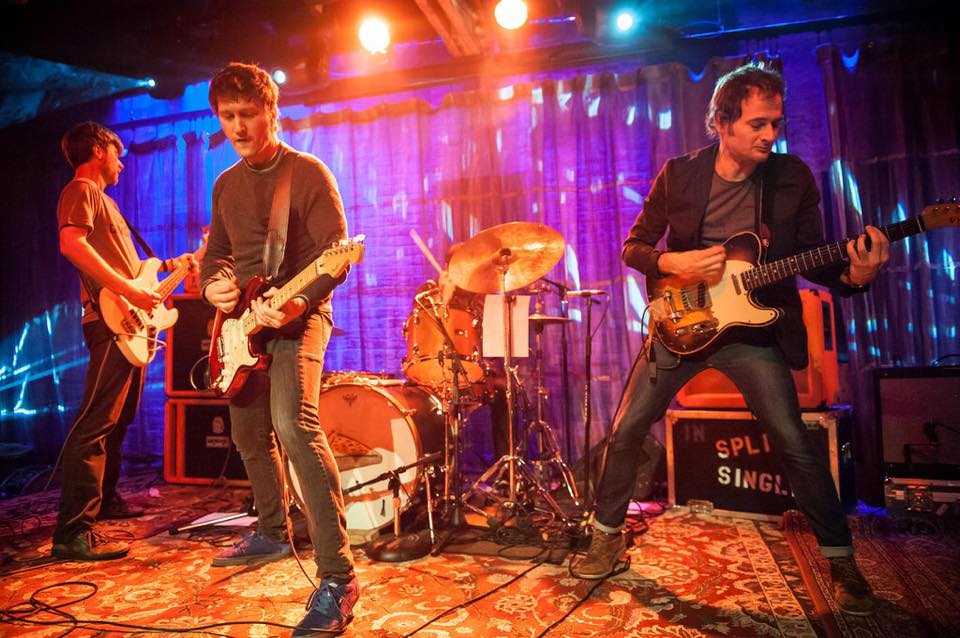 The Sheer Spirit of Split Single

Jason Narducy’s single project has resulted in a ton of sparkling songs; he plays (with Wilco’s bassist) at Cactus Club.

Jenny Lewis All By Herself

Melt-Banana comes to the Cactus Club, ready to discombobulate.

The Overlooked Artistry of Alejandro Escovedo

Death Cab for Cutie Gets Angry

After its leader’s divorce and despite glossy new album the band is playing harder and angrier on its new tour.

The Beautiful Agony of Sufjan Stevens

Singer songwriter’s latest album takes on his parents. He performs at Riverside Thursday.

The “insurgent country” artist can confuse audiences. But he’s edgy, funny, and good.

The Mavericks Are Still Hard to Define

They mix country, Latin, pop and even vaudeville. They play two shows at Northern Lights Theater.

Indie rock group, playing at the Pabst, has won popularity without sacrificing its artistry.

Maybe even when he’s being silly. The singer songwriter comes to Shank Hall and should be a treat.

Of Montreal Lands In Milwaukee

The group’s leader, Kevin Barnes, might be called twee, pretentious or emo, but Of Montreal can no longer be dismissed as minor.

Midge Ure comes to town, with a long, impressive history behind him as musician and songwriter.

Still Eccentric After All Those Years

Grammy-winner at Pabst Saturday; or there’s bluesy Hozier at the Riverside.

The Return of Sleater-Kinney

Reunited band comes to town, as does Fleetwood Mac and B-52s.

The Mellow Side of Marilyn Manson?

After years of making controversy, the man and the group have settled into making music.

Rocking Out at Alverno College?

The ever-productive Jon Mueller and his Death Blues ensemble celebrates life -- anywhere -- with a vengeance.

That’s the sound of The Soil & The Sun, known for “Are You” and coming to Turner Hall.

The Power of Pablove

Marshall Crenshaw and the Bottle Rockets come to town, with decades of good music to draw on.

The Legacy of Frank Zappa

The Return of Sam Llanas

He’s quit the BoDeans, his music has gotten darker and he's ready to rock at Shank Hall.

The Bad Plus, playing at the Jazz Estate, mixes jazz with rock, covering songs by Nirvana and Pink Floyd

Best shows are all over town and all over the musical map.

Ready Or Not, Here Comes GWAR

Imagine Vikings from outer space. But funnier. The thrash-metal band lands this week at the Rave.

The Restless Style of David Bazan

The Seattle-based musician revisits his songs with Passenger String Quartet at Turner Hall.

Best Shows of the Week

Five Best Shows of the Week

From home-town act Field Report to NRBQ and tUnE-yArDs, it’s a week of wild variety.

The Legend of Patti Smith

The Indelible Impact of Erasure

‘80s synth-pop band comes to town. As do the Wood Brothers, Braid and Warpaint.

The Austin natives take their summer album to a cooling Midwest, Club Garibaldi prepares to host a Brooklyn gem.

The Ohio natives evolve, but stay true to their bluesy roots

The Return of Ramblin’ Jack Elliott

A huge influence on Dylan and others, the legendary folk singer comes to town.

The Dutchess and the Duke’s Strange Journey

The Pacific Northwest duo have reunited -- yet again -- playing their dark folk music at the Cactus Club.

Is Alejandro Escovedo the Ultimate Survivor?

A key rock innovator since the 1970s, he headlines a week that also features Jeff Bridges and the Abiders

Why I Love Future Islands

They’re at Turner Hall this Sunday, and definitely worth a try.

The Secret to Pat Metheny’s Success

He’s a prodigy who pleases, as his Tuesday show at Northern Lights should prove.

Everything But Natalie Merchant

Alas, Merchant cancelled her Pabst concert, but lots of other shows on tap this week.

The Long Life of Dick Contino

The famed accordionist, 84, will play Festa Italiana, in a week that also features Jack White and Jackson Browne

Sarah McLachlan Turns Down the Volume

After the thundering decibels of Summerfest, it’s a quieter week of music, led by the Lilith Fair founder.

Best Albums of the Month

The Return of Bob Mould

The week’s five best concerts aren’t all at the Summerfest grounds.

Why Nick Cave is Hated — and Loved

Cave provides the dark side of a week also featuring Nikki Lane, The Features and the Old 97s.

Five Best Albums of May

Tori Amos, Haley Bonar and the Roots are three of the best.

And if they don’t, the week also features Tony Bennett, Holy Wave and Sandra Bernhard.

Man of Many Bands

Ever-busy Conor Oberst, the Safes and the Monkees come to town.

Failure, revived after 17 years, is the latest success and heads top concerts of the week.

Rediscovered soulster comes to town, as do Truckfighters and Wye Oak.

The Both, EMA and Fear of Men lead the list.

Shooting for the Fences

Zeus and Leon Russell and Uh Huh Her come to town.

Five great acts coming to town, none of whom feature any Lady Gaga-style grossness.

March’s best albums include new ones by Future Islands and by Ambrose Akinmusire.

Sorry, just a roundup of the week’s best five shows.

Opening Day is here and so are five shows that are much warmer than the weather.

Five shows that may help you get over that Post-Paddy’s Day funk.

Not much Irish music in the weekly round-up, but plenty of other great stuff.

February’s best CDs include those by Beck, Neil Finn and Neneh Cherry.

Five new CDs of note and one to avoid, with apologies to The Boss.

This was supposed to be about Nickelback, but that will have to keep for next time, or another time. By all indications, that horrible Canadian band will still be here by the time I get around to tearing into them with vituperative insight. The delay was caused by the release of Religulous on DVD in […]

A few years ago, after attending a Christmas-charity show featuring several metal-styled acts, I posited a reasonable question: are rock ‘n’ roll and Yuletide cheer compatible? After all, this is the season of comfortable sweaters, chestnut visions, and a jolly old fat man who apparently helps remind us of the birth of Jesus Christ — […]

This might not be the Smashing Pumpkins you remember from seven years ago—or, as seems more likely, from around 1995, when leader Billy Corgan symbolized the meld of artistic and commercial ambitions of alternative-rock as it went mainstream. Back then, the Pumpkins were really his baby, and Zeitgeist discards any pretense of a “band:” the […]

Fourteen years since their last album, 11 since their last show and yet it feels almost effortless the way Crowded House pick up where they left off. Admittedly, Time on Earth represents an incomplete reunion – original drummer Mark Hester died in 2005, and keyboardist Mark Hart wasn’t part of the initial lineup – but […]

Two years ago, The Great Destroyer marked a period of incredible transition for Low. Not only did the album itself bristle with challenges to the band’s established method of slow and steady and hauntingly beautiful, but the period shortly after its release also saw bassist Zak Sally leave the band and founding member Alan Sparhawk […]

Ted Leo and the Pharmacists

The Apples in Stereo

As any negative nabob can tell you (and in fact is telling you right now), it’s extremely difficult to favor the pop – or pop!, onomatopoeically speaking – in pop-rock without coming across as a chirpy Pollyanna. Even the Apples in Stereo, for all their honest effervescence, have periodically seemed like the token frown-upside-down representatives […]

No artist is ever completely unpredictable: patterns form and grooves are worn. Some have no need to pull themselves away from the paths they’ve already beaten. Sometimes, like Björk or Beck, they simply realign, rearrange, rethink. At its most functional, The Information is a rethink of Beck’s creative relationship with producer Nigel Godrich (now highly […]

From the title track that opens this album, you might get the idea that Rammstein remain the same: Till Lindemann growls verses and operatically chants choruses, everyone else stomps up a blitzkrieg behind him, and the song fades in a swoon derived from both beer hall and dance club. Yet even here, Rammstein sound more […]

First, Lydia Lunch was the girlfriend of Dead Boys frontman Stiv Bators; then she took over the mic herself in Teenage Jesus & the Jerks, then Eight Eyed Spy; since then, she’s been on her own. But she’s always been a mercurial figure, a no-wave queen and a hot-and-cold seductress. That continues with Smoke in […]

as it is to loathe, but Interpol actually make it comprehensible and appealing. Because, even more on their current album Antics than on their 2002 debut Turn on the Bright Lights, the NYC quartet view that time through their own artistic lens, focusing the best of the (largely non-American) music of that period into something […]

New West www.buddyandjulie.com Nashville might not be what it used to be, but the city must have something to recommend it still, because Buddy Miller lives there. Perhaps he serves as a reminder—like better-known friends Steve Earle and Emmylou Harris—of precisely what Nashville used to be: a place where a man like Miller, who ordinarily […]

SARAH McLACHLAN Afterglow Arista www.sarahmclachlan.com When Sarah McLachlan disappeared half a decade ago, it wasn’t the artistic equivalent of Patti Smith’s retirement, but in hindsight it helped to clear the way for the Parade of Candy-Striped Sluts. In the meantime, too, her adult-contemporary niche was subdivided (“Here’s your slice, Alicia; here’s yours, Norah…” ), which […]

THE TWILIGHT SINGERS Blackberry Belle Birdman Gore Vidal wrote it first: style forms the crux of art. Without it, an artist must fall back on his obsessions, which never adequately support his muse. As frontman for the much-missed Afghan Whigs, Greg Dulli freely intermingled his musical and thematic fixations — rock/decadence, rap/violence, Prince/sex — but […]

PRETTY GIRLS MAKE GRAVES The New Romance Matador In a ranking of best current band names, Pretty Girls Make Graves (also the best use, period, of a Smiths song title) would have to be up there with … And You Will Know Us by the Trail of Dead, but it proves to be a misdirection […]

Josh Rouse 1972 Rykodisc www.joshrouse.com Mosh Rouse slides away from easy comparisons today’s demographic culture requires. He manifests some of the shyness of Nick Drake; he sings with some of the grainy charm of Paul Westerberg; he can move with the quiet heard in late-period Yo La Tengo; and he reveals his romantic side in […]

Frank Black and the Catholics

Frank Black and the Catholics Show Me Your Tears spinART www.spinartrecords.com/bands_frankblack.html The standard spiel about Frank Black could apply to any other seminal rock ‘n’ roll figure (Bob Mould, say) who presaged the alternative-rock insurrection but neither profited heavily from it nor died conveniently young. The line goes like this: “He hasn’t done anything great […]