Cash bail is binding constitutional amendment, while public assistance vote is only advisory. 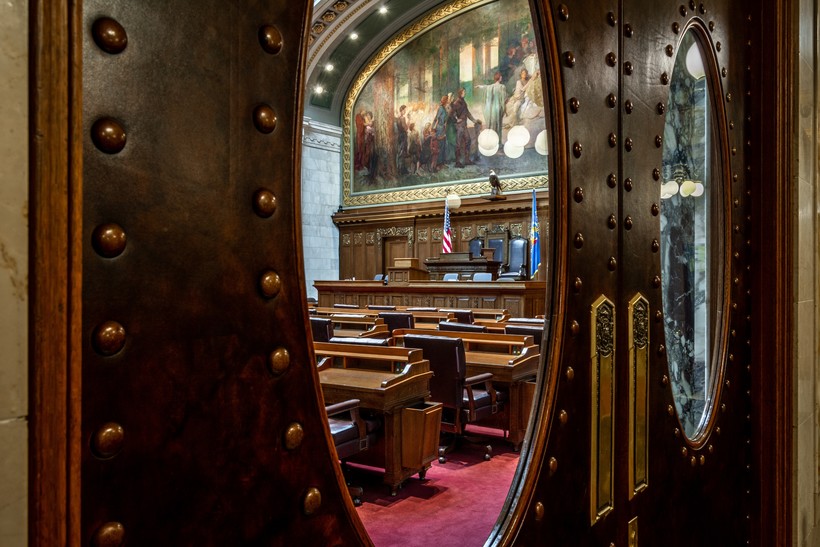 State lawmakers on Thursday approved two resolutions that will now head to voters on April 4.

The first, a proposed constitutional amendment, would change how judges decide cash bail for people charged with violent crimes. If passed by voters, it would give judges more criteria to consider when imposing bail on a detained person.

The second, an advisory referendum, would ask the public’s opinion on whether to require “childless, able-bodied adults” to search for employment while receiving public benefits.

The resolutions were both approved in the Assembly Thursday with unanimous support from Republicans. Several Democrats also supported the proposed constitutional amendment on cash bail.

Both measures passed the Senate earlier this week.

The resolution on bail would allow judges to consider a person’s criminal history, among other factors, when determining whether to impose bail.

On Thursday, its supporters argued it would prevent people charged with crimes from returning to their communities and reoffending. Many cited the case of Darrell Brooks Jr., who killed six people at the Waukesha Christmas Parade of 2021 while out on bail. Opponents argued cash bail penalizes only those unable to afford to pay their way out of jail and that the proposed change wouldn’t have made a difference in Brooks’ case.

Several Democrats argued for the eradication of cash bail as a whole, saying that people who pose a risk to their communities shouldn’t be let free for any amount of money.

Twelve Democrats joined with all Republicans to support the resolution, which passed on a 74-23 vote.

This was the referendum’s second time being approved by the state Legislature — a requirement for a constitutional amendment before being brought to voters.

Record-breaking homicide rates in the city of Milwaukee was a frequent topic of debate on Thursday, but Milwaukee lawmakers who spoke largely opposed the plan.

Rep. Evan Goyke, D-Milwaukee, argued that cash bail allows people with means to be released, even if they’re dangerous. He gave examples of three Wisconsin men charged with violent crimes who had posted tens or hundreds of thousands of dollars in cash bail and then returned to their communities.

“I support pretrial detention, I support people that pose a public safety risk being held in custody,” Goyke said. “But when we make that decision and that measure solely about money, we allow a subgroup of people the opportunity to buy their way out of jail.”

Republican lawmakers representing Waukesha County spoke emotionally about the effect that the 2021 Christmas Parade had on their families and constituents, arguing that this resolution would center crime victims.

“It was traumatic, it was, but we’re not here today because of that issue,” Rep. Adam Neylon, R-Pewaukee, said of the tragedy. “What that Christmas Parade did was provide real world examples of the people we’re trying to protect. And that is a step in a positive direction.”

But Rep. Ryan Clancy, D-Milwaukee, who said his child was marching in the 2021 parade, argued that cash bail was a solution to neither the Brooks situation nor to homicide rates and other violent crimes in Milwaukee.

“It is inherently inequitable and ineffective to let people with money leave jail while we incarcerate the poor,” he said. “If you are so dangerous as to need to be removed from the society, having cash on hand should not be an antidote to that.”

Lawmakers on both sides of the issue listed people who committed crimes when out on low bail. Supporters of changes to the bail system used this to illustrate that judges need more latitude to impose bail on dangerous people. Opponents of the change argued that this demonstrates the ineffectiveness of offering dangerous people any way to pay their way out of jail.

The resolution doesn’t change the amount of bail that judges can charge. Rep. Cindi Duchow, R-Town of Delafield, the bill’s coauthor, said judges still have the right to demand “$10” or “$10 million.”

She also said that the bill would expand the type of criminal history that a judge could consider when determining how dangerous a person is.

Lawmakers also approved an advisory referendum that would ask voters whether they think the state should require “able-bodied, childless adults” to look for work in order to receive public assistance.

“So we have more people on the sidelines, and we have to do everything that we possibly can to get them off,” Vos told reporters before the start of Thursday’s session.

According to the state’s most recent jobs data, Wisconsin’s unemployment rate was 3.2 percent in December, which is near a record low. Wisconsin’s labor force participation rate of 64.7 percent is higher than the national average, but Vos noted it remained lower than before the COVID-19 pandemic.

By sending the referendum to voters, rather than passing it as a bill that would be dependent on Democratic Gov. Tony Evers‘ approval, Vos said the Republican sponsors hoped to demonstrate popular support as well as send “a message to the federal government.”

While federal law currently doesn’t allow work requirements for Medicaid access, “that is something that we hope to dramatically change,” Vos said.

Wisconsin law already requires childless adults to search for jobs in order to collect unemployment insurance, which Democrats said made the advisory referendum unnecessary. They suggested that the referendum was instead an attempt by Republicans to juice turnout in the consequential April 4 Wisconsin Supreme Court election.

“Why would you put an advisory referendum on a ballot to gauge the public’s interest in something that the state is already doing?” said Rep. Kristina Shelton, D-Green Bay. “This is not about your priorities. This is about politics.”

But supporters said it was precisely because of the preexisting requirements, waived during the COVID-19 pandemic, that the resolution was necessary.

“I agree with the governor. It’s already state law,” said Rep. Jon Plumer, R-Lodi. “But maybe we should start enforcing it and get those people back to work.”

The advisory referendum passed on a straight party-line vote, with Republicans in favor and Democrats opposed.