By Danielle Kaeding, Wisconsin Public Radio - Jan 12th, 2023 01:17 pm
Get a daily rundown of the top stories on Urban Milwaukee 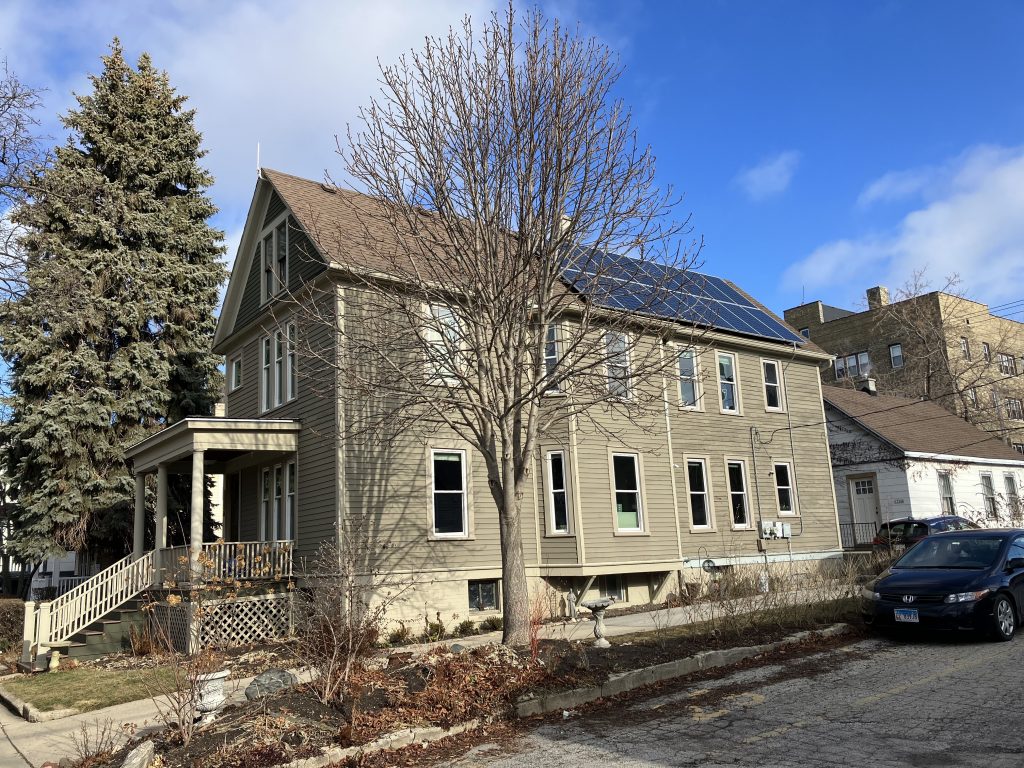 Solar panels on the roof of a home in Milwaukee. Photo by Dave Reid.

Solar developers continue to face uncertainty over whether they can use a financing tool that could expand access to solar energy despite regulators signaling limited approval of the practice last month.

Third-party financing allows solar developers to pay the upfront cost of solar installations and lease the systems to customers, who pay them off over time. Supporters of the financing arrangement say it’s similar to leasing a vehicle. While the solar leasing arrangements are common in some states, their legal status is unclear in Wisconsin. Here, guidance from the commission has indicated third-party financing of small-scale renewable projects would meet the definition of a public utility, requiring developers to get approval to sell power.

In December, utility regulators signed off on Vote Solar’s request to allow a Stevens Point family to lease a solar system, finding the project doesn’t sell power to the public. On Tuesday, utility regulators stopped short of granting Midwest Renewable’s request to declare such financing arrangements are legal on a broader scale. The commission voted 2-1 to gather more information on the nonprofit group’s petition.

“This particular case, stands in stark contrast to the Vote Solar case,” PSC Chair Rebecca Valcq said. “The Vote Solar case had very specific facts, very specific terms and conditions. This does not, and I am not and have never been ready or willing to push this commission’s limits beyond what is legally appropriate.”

Valcq and Commissioner Tyler Huebner said Midwest Renewable’s request didn’t pertain to a specific financing arrangement with a single customer as in the Vote Solar case. Instead, the renewable energy advocate wants to install more than one project.

Midwest Renewable has secured funding to install three 20-kilowatt solar projects for Milwaukee area public schools under third-party financing arrangements, according to the group’s executive director Nick Hylla. He said they want clarity on whether the financing tool is legal because it’s holding up projects.

“It’s limiting our activity and our ability to kind of meet our mission and serve customers in the best way possible,” Hylla said.

Solar developers fear they’ll be regulated as a public utility or won’t be able to connect solar installations with the utility’s system. That was the case for Iowa solar developer Eagle Point Solar. The Milwaukee Journal Sentinel reported the company wanted to install solar panels on buildings in Milwaukee, but We Energies wouldn’t connect the project to the utility’s system.

The Wisconsin Utilities Association, Wisconsin Electric Cooperative Association, and other groups have opposed efforts to declare solar developers are not public utilities under the law.

“We maintain that third-party financing is not allowed under the statutes and such a broad policy change would require action by the Legislature,” Bill Skewes, the association’s executive director, said in an email.

The legality of third-party financing has been left unresolved despite multiple court challenges and a GOP-sponsored bill that would have exempted providers of third-party owned systems from regulation as a public utility. The legislation failed to pass last year.

Sen. Rob Cowles, R-Green Bay, has backed the proposal to allow solar leasing and chairs the Senate’s natural resources and energy committee. He didn’t return requests for comment Wednesday on whether the bill may be revived this session. Rep. David Steffen, R-Green Bay, who chairs the Assembly’s energy and utilities committee, declined to comment on the matter.

Midwest Renewable has sued the Public Service Commission over the issue, but a Portage County court dismissed its lawsuit. Hylla said whether they appeal that ruling depends on how regulators address their petition. Utilities also appear likely to appeal the decision on Vote Solar’s request when a final order is issued in that case.

Hylla maintains the commission can declare the tool is legal under a certain set of facts that could be applied to multiple projects. Under state law, Valcq said those facts have to be “very specific and narrow” to determine whether projects fit under the definition of a public utility.

The law defines a public utility as any entity that provides “heat, light, water or power either directly or indirectly to or for the public.”

Hylla maintains it’s too expensive and difficult for customers or solar developers to file a petition on every single project where they want to use third-party financing.

Solar developers and groups like Clean Wisconsin and Wisconsin’s Citizens Utility Board argue a third-party financed system that provides electricity to only one customer under contract doesn’t qualify as a “plant or equipment” producing power for the public under state law.

“In this case, the purpose of each (system) is to partially serve only one customer. However, can you serve each customer over and over and over and not be (serving) the public? Honestly, I do not know,” Huebner said. “The prior case law we have in Wisconsin all relates to distinct pieces of equipment, one piece of equipment, at one location that’s serving more than one customer. We don’t have case law describing how to handle multiple pieces of equipment at multiple locations serving multiple customers.”

Utilities also contend the financing arrangements harm their customers by shifting costs. Commissioner Ellen Nowak reiterated that argument as she opposed allowing more time or review of the latest petition.

We Energies has said ratepayers who are getting power from solar systems don’t need to buy as much electricity from the utility. The utility argued that means those who install solar are paying less of the cost to distribute electricity on its system, requiring them to recover those costs from other customers.

Utilities like We Energies have said they’re not opposed to rooftop solar projects and regularly tie installations into their systems.

In the meantime, regulators want more specifics on the projects the renewable energy advocate is proposing. Commissioner Huebner said whether Midwest Renewable qualifies as a public utility depends on the equipment they own and operate, as well as who is served.

Hylla said it would be beneficial to have more clarity on third-party financing now that the Inflation Reduction Act has allowed nonprofit groups and government institutions to take advantage of solar tax credits.

“This concept of defining where the line is, for utility regulation, really will help to define what the market looks like, and how people are served,” he said.