$11 million project will sell houses to owner occupants rather than predatory landlords. 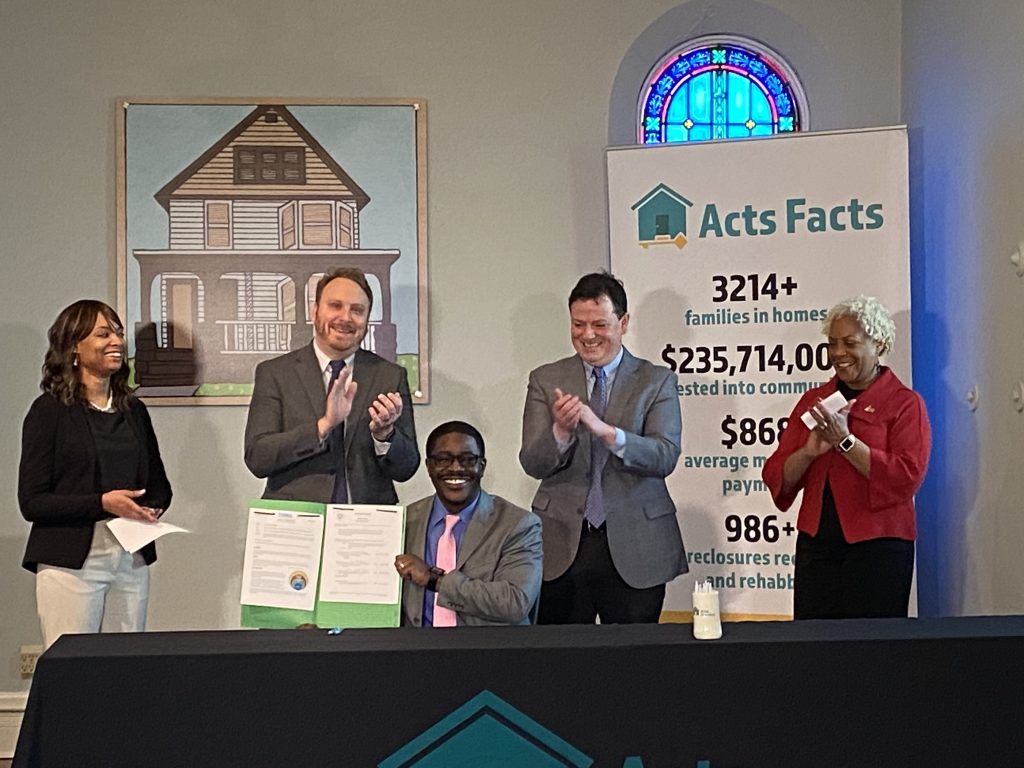 In August last year, ACTS Housing, a local nonprofit, announced it was creating a new housing acquisition fund to get in front of out-of-state investors buying up single-family housing stock in Milwaukee. The plan is to purchase homes that would otherwise go to these investors and sell them to owner-occupants. The project has an initial fundraising goal of $11 million.

The project is an idea that came out of the Community Development Alliance (CDA) Collective Affordable Housing Plan, which also identified the need for 32,000 new Black and Latino homeowners in Milwaukee in order to close the racial housing gap.

Teig Whaley-Smith, the CEO of CDA, said that major institutions interested in tackling problems like homeownership don’t always have the resources to research and develop a new system. “So we just keep doing the same things over and over again.”

Through working on the plan, CDA learned that there is a network of institutions in Milwaukee interested either in financially supporting (in the case of Milwaukee County and the Zilber Foundation) or implementing (ACTS Housing) a housing acquisition fund. “And so we were able to bring together all those puzzle pieces.”

The problem of predatory investment in Milwaukee is two-fold, Whaley-Smith said. First, there are investors that continue to aggressively market to homeowners seeking to purchase their property. “I live in the Sherman Park neighborhood, and I get a postcard, a phone call or a text every day,” Whaley-Smith said.

The second challenge is the growth in portfolio purchases, where a private investor will purchase an inventory of properties through one transaction. “So in 2017, there are only about 150 properties that were sold as part of portfolios,” he said. “Now there’s over 800 a year.”

Get a daily rundown of the top stories on Urban Milwaukee
The county is using money from federal funding allocated through the American Rescue Plan Act (ARPA) for the project. The county was allocated approximately $185 million nearly two years ago through the stimulus bill. Crowley said the funding has given Milwaukee Count the “luxury” of funding projects like the homeownership acquisition fund, adding “but it’s gonna be hard for us to do these things moving forward without even more additional revenue.”

In 2021, the county executive launched the first strategic plan for Milwaukee County government which made it the county’s goal to become the healthiest in Wisconsin by eliminating racial health disparities and achieving racial equity. The function of the plan has been to integrate racial equity goals and planning into the day-to-day work of the government.

“Access to stable housing improves the lives of not just individuals, but families, neighborhoods in our entire community,” Crowley said. “It’s something that I understand far too well having experienced housing instability during my early childhood years.”

Crowley told Urban Milwaukee that the housing acquisition fund is an example of the type of project that will be critical to taking on housing insecurity in Milwaukee County, knitting together several non-profits and private and public funding for a single objective. “It’s not going to be Milwaukee County alone that solves this issue,” the county executive said.

Crowley has been lobbying state legislators for an increase to the Milwaukee County sales tax, but, he said, “that’s really to just continue to do the work that we’ve been doing with the current services.”

When it comes to projects like a housing acquisition fund or eviction prevention, “We would love to find out ways that we can continue, but unfortunately, we don’t have those types of revenues coming into Milwaukee County.”