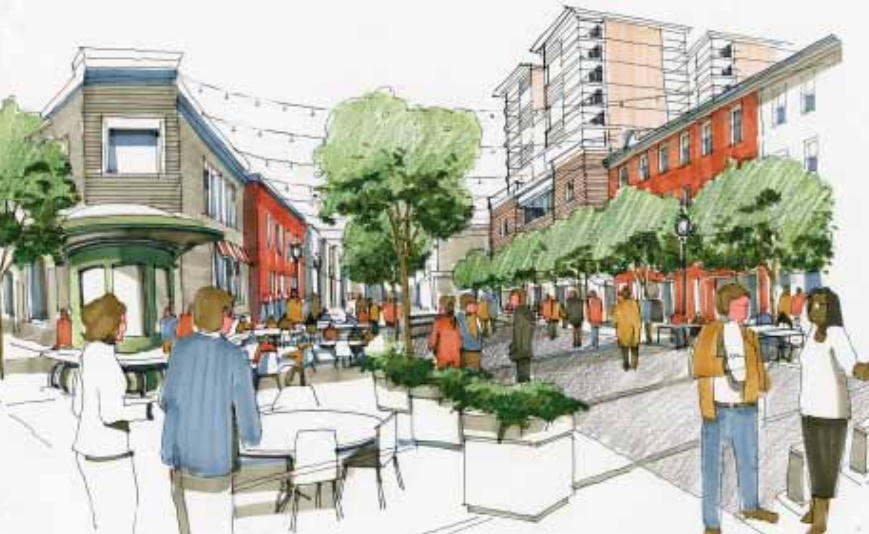 Increased tax revenue from three new East Side apartment buildings would pay for pedestrian safety improvements at one of the city’s busiest and most dangerous intersections and the creation of a pedestrian plaza at E. Ivanhoe Pl.

A portion of E. Ivanhoe Pl., which leads into the Farwell Ave. intersection, would become a pedestrian plaza. The one-way street is between Crossroads Collective food hall and Hooligan’s Super Bar. The project was first contemplated in the 2009 Northeast Side Area Comprehensive Plan and Tim Gokhman, managing director of Crossroads-owner New Land Enterprises, has publicly championed the plan for at least four years.

The pedestrian plaza would only cover half of E. Ivanhoe Pl. between N. Prospect Ave. and N. Farwell Ave. The eastern portion would be converted to a two-way street, allowing continued motor vehicle access to the Educators Credit Union drive-through window.

The city would use increased property tax revenue from three proposed apartment buildings to fund the proposal, which has the backing of the East Side Business Improvement District.

“We, as a BID, believe that the initial streetscape improvements on North Avenue can serve as a catalyst for additional improvements all along the avenue,” said BID director David Smulyan in a statement issued on Nov. 3.

Get a daily rundown of the top stories on Urban Milwaukee
The board of the Redevelopment Authority of the City of Milwaukee unanimously endorsed the plan Thursday.

“When people think of the North Avenue corridor they don’t necessarily think of all the development opportunities,” said Department of City Development (DCD) economic development specialist Dan Casanova to the board.

But three proposals are all moving forward, albeit at different speeds.

The developers will not see a direct benefit from the creation of the TIF district, with the city instead using the structure to temporarily sequester the increased property tax revenue to pay for public improvements. The existing tax revenue from the site will continue to flow to the property taxing entities.

The city would use a provision in state law that allows for TIF districts to pay for public improvements within a half mile of their boundaries.

The funding is divided into two tranches, a $2.5 million first phase and a $1.3 million second phase. An additional $100,000 would be allocated to fund DCD’s existing Commercial Corridor programs within the allowable area; those programs include reimbursable facade and signage grants designed to attract or retain commercial tenants.

The city is breaking up the infrastructure allocation into phases because of uncertainty with the three projects. The Pattee-Borg project is under construction and the Sunset Investors project is moving towards a groundbreaking, but the redevelopment of the Judge’s site is far more conceptual and no plans have been formally introduced. For the purposes of planning the TIF district, the city assumed Olson would develop a 35-unit apartment building by 2027.

As his first act in office, Mayor Cavalier Johnson declared reckless driving a public safety crisis. As one of many responses, DCD, the Department of Public Works and other city departments have expanded the use of TIF districts to pay for streetscaping projects designed to improve pedestrian safety by narrowing or redesigning roadways. Common infrastructure changes include adding curb extensions that shorten pedestrian crossing distances and block vehicle passing in the parking lane.

The final design of the East Side pedestrian improvements is not yet complete. The full Common Council must still approve the TIF district’s creation.

The TIF district is planned to pay off all of its costs by 2042. 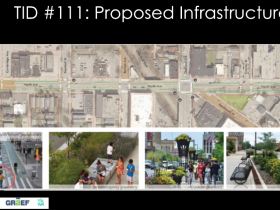 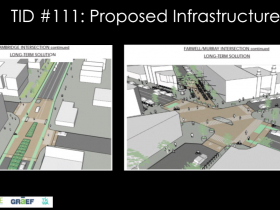 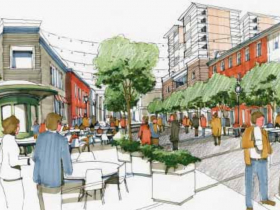 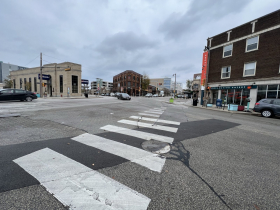 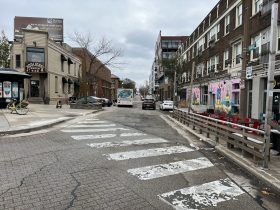 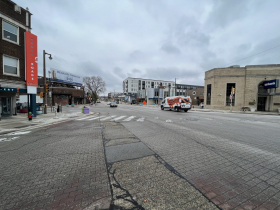