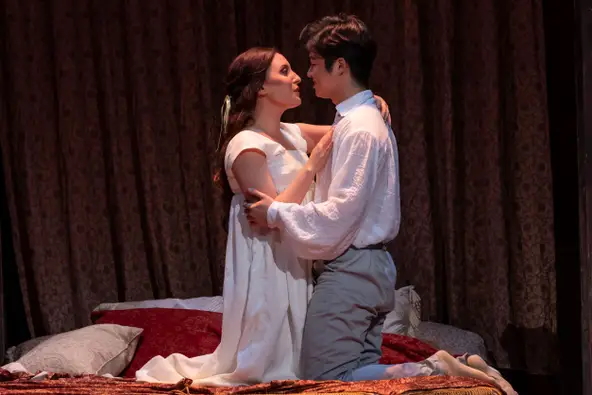 The Florentine Opera Company opened its 89th season for grand opera with the well-traveled Charles Gounod’s “Roméo et Juliette” from the 19th century.

The wordy supertitles above the stage exactly chronicle the derivations — with unintended reminders of how the French almost understood Shakespeare and also clarifying some operatic variations to allow the star-crossed lovers to die singing together in the tomb (beautifully sung and acted, another reason not to spend too much time looking up at the supertitles and missing the moments of dramatic interaction).

The enormous Uihlein Hall of the Marcus Performing Arts Center (2,125 seats) had the Milwaukee Symphony Orchestra in the pit. The opera was efficiently led by Francesco Milioto, whose precise gestures were also aimed at the singers. The Florentine Chorus was well handled and is far more central to this opera than is often the case at the Florentine, introducing the story and commenting on it.

Stage director David Lefkowich worked hard to humanize the usual way opera tells a story and provided some important eerie touches to invigorate the musical bridges. I would encourage even more renovation – this opera screams for it.

The opera rises on the quality of its Juliet and Romeo, who each have notable arias and also have to blow us away with how their ardor can mesh in twin peaks of melody and combined notes that feel joined as if one voice.

Here is where the production excels, providing that sense of youth and fresh interpretation within the music. Soprano Emily Pogorelc (a Milwaukee native) has stunning moments. Looking at her you’d expect a small soprano, but she suddenly echoes into a forceful impaling soprano, mesmerizing us with genuine acting ability. She makes the famous Juliet’s Waltz (sometimes known as “Je veux vivre”) alluringly bouncy yet as hypnotic in its own way as her heart-palpitating poison-drinking aria (“Amour ranime”).

Faced with less variety in his lyric tenor arias, another remarkable talent, Duke Kim, brings a tremendous ability to modulate the highest notes and blend with Pogoreic on their many duets, which Lefkowich stages for full romance, taken advantage of the physicality of his leads. Kim’s modulated dexterity and clear interpretive follow-through in the “Fair Sun” soliloquy make a viewer long for even more variations in his arias, but that’s more on Gounod than on him.

In much of the opera, particularly the long portions left for the orchestra, the stereotypes of romantic classicism abound. Gounod was prolific and also had a religious oratorio sensibility along with a workmanlike underlay. But he really shone in his melodic variations on French art songs. That helps some of the arias approach greatness as well as fame and allows Romeo’s Page (rich-voice “pants suit” soprano Cassandra Zoé Velasco) a moment in the sun with a mocking turtledove song, a concept Gounod interpolated for this opera.

The traditional scenery, courtesy of the Virginia Opera, is no great shakes and takes too long over five acts (one intermission) to get in place. Though I question the granny glasses (supposedly a mask) stuck on Juliet in the ball scene, costume designer Theresa Ham generally re-creates an opulent, flowing Middle Ages Verona with room for boudoir intimacy. There are also compelling swordfights by Christopher Elst particularly in a slow-motion ghost scene and constant wig magic by Erica Cartledge.

]As well as the orchestra handles the charts, the instruments are clearly no more challenged than doing movie scores from the 1940s and ‘50s. These are the parts of Gounod that don’t inspire reverence. The chorus performs well and is staged nobly, but few of their moments elevate the audience into awe.

Baritone Zachary Nelson handles the Queen Mab song nimbly and seeks to find moments to make Mercutio a vivid personality. Gounod’s version of the roles doesn’t give much room for character development within the operatic constraints for bass Matthew Treviño as Friar Laurent (a textbook case in how opera’s shortcuts can make a priest look intellectually foolish), or tenor Patrick Bessenbacher as Tybalt. Bass baritone Musa Ngqungwana tries to substitute big size and power for any purpose to Count Capulet. These are good voices, but beyond the lead duo there were few standouts.

To work as well as it does, the production does require acting as well as singing from Romeo and Juliet and I wish more patrons had seen it happen.

Maybe it is the familiarity of the story and the opera, but the vast Uihlein Hall seemed only half filled to me and that suggests the Florentine needs to draw much more deeply to have a 90th season.