Budget increases parks, other departments funding, but shows that cuts are on the horizon. 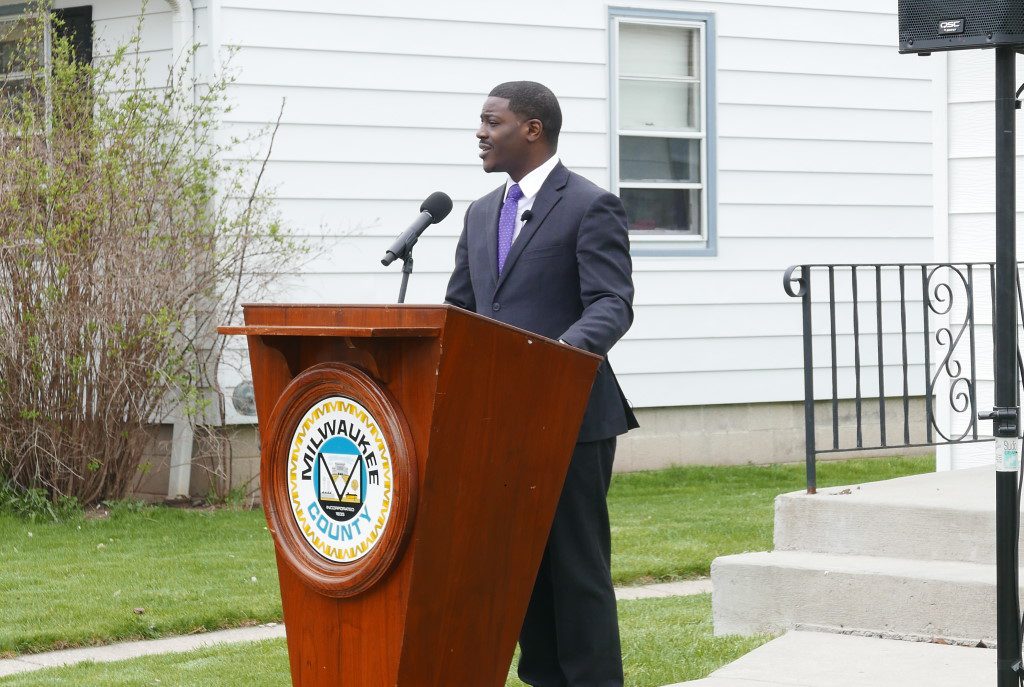 David Crowley speaks at his swearing in ceremony. File photo by Graham Kilmer.

Milwaukee County Executive David Crowley‘s 2023 budget proposal doesn’t include any major service cut, but it does show what’s to come if the county does not fix its structural financial problems.

“The tough decisions made in this budget should serve as a preview of what lies ahead if Milwaukee County isn’t given the tools to raise additional revenue and fund local priorities,” Crowley said in delivering his budget proposal Thursday morning.

Crowley’s proposal closes the county’s $12.6 million structural budget deficit through an $8.8 million increase in prescription drug rebates, a 10% growth in sales tax revenue, a withdrawal from the debt service reserve and holding department spending flat. The county’s property tax levy would increase by 1.2% ($3.6 million) to $313 million. The total budget is $1.34 billion.

“I’m proud of the progress this budget makes in advancing our strategic plan, but its priorities are rooted in the reality of Milwaukee County’s fiscal constraints,” Crowley said.

The Milwaukee County Transit System (MCTS) is the canary in the coal mine for the county’s growing fiscal issues. In 2023, Crowley is proposing to reduce service on four bus routes, 52, 92, 34 and 88, with an average of eight more minutes between buses. The system, which has seen its ridership drop since the onset of the pandemic, is currently heavily reliant on federal pandemic aid after seeing its state aid cut last year. By 2025, when the federal aid runs out, MCTS faces a massive, $32.9 million cut.

Crowley’s office estimates the county is facing an $87 million budget deficit over the next five years.

The county executive once again used his budget address to stump for a new 1% sales tax, which he said could generate $180 million annually for the county. Such a change would require approval from the state legislature and, potentially, a countywide referendum. State aid to the county has been frozen for more than a decade, property tax revenue is capped by the state, and coupled with the cost of “imprudent decisions made by leaders decades ago” has created an average annual budget gap of $30 million over the last decade translating to approximately $300 million in budget cuts.

Despite the county’s continuing financial challenges, Crowley’s budget proposal manages to stave off major cuts to county services, and makes investments in equity, county employees and departments, as well as major projects.

The Milwaukee County Board will take up the budget in October, reviewing the proposal and offering amendments. On Oct. 11 the Office of the Milwaukee County Comptroller will submit a financial analysis of the proposal, and on Nov. 1 the county board will hold its annual public budget meeting, allowing members of the public to weigh in on the budget.

As Urban Milwaukee reported earlier this week, the budget proposes to change the name of the House of Correction to the Community Reintegration Center (CRC) accompanied with investments in programming and services.

Get a daily rundown of the top stories on Urban Milwaukee
“We know that if we can meet the needs of individuals when they are in our care, they are less likely to recidivate and engage in risky behavior that can put themselves or others at risk,” Crowley said.

The budget for the facility is increased by approximately $3.2 million in 2023. The increase covers approximately $900,000 in annual salary increases and nine new full-time employees working in psychiatric social work, community outreach, public relations, quality assurance, administration and operations, $320,000 for higher quality food, $1.57 million in increased healthcare costs and $125,000 to reduce the cost of phone calls.

It also uses $500,000 in tax levy support to begin covering the $3 an hour increase for corrections officers that was initially funded with federal stimulus funding. The goal is to transition the cost of the wage increase to the tax levy by 2025.

The county’s Department of Health and Human Services (DHHS) saw its budget blown apart in 2022 due to a rising number of Milwaukee youth being sent to state-run youth correction facilities in Lincoln Hills and Copper Lake. At the same time, the state increased how much it charges counties to incarcerate children.

“The result is we’ve had to shift funding away from community-based service investment to corrections,” Crowley said.

The budget includes a $7.8 million increase in the amount of money for state correctional charges.

The county-run Vel. R. Phillips Youth Detention Center has also been grappling with overcrowding. Crowley said it averaged a daily population of 131 during the first six months of the year. The facility only has 127 beds.

The budget proposes $1.7 million to support the center’s operations, $257,000 in additional funding for food and medical care and $1.5 million for related supportive services.

“Those are dollars that could have gone to expanding the credible messenger program,” Crowley said.

Crowley’s budget did include a $1.7 million increase for the credible messenger program. Crowley said 77% of the justice-involved youth in the program have not re-offended since the program launched in the spring of 2021. “That is an amazing statistic, and I can only imagine the impact we could have with more messengers on the streets connecting with our youth unlocking their true power and potential,” Crowley said.

The DHHS budget in 2023 would be increased by $22.2 million, largely to fund a $20 million increase in its budget for the Children’s Long-Term Support Program. The program provides supportive services to children and families impacted by disabilities and has seen a significant increase in enrollment. The $20 million is to come from the state.

For the second year in a row, Crowley increased the budget for Milwaukee County Parks, another service that does not have a state mandate and is sensitive to future cuts to the county budget.

The budget would also create 17 new full-time positions, offset by funding typically reserved for the hiring of seasonal workers. The parks department has seen huge staff reductions over the last decade in response to declining revenue, and it has also struggled to hire enough seasonal workers.

Fees at a number of amenities would be increased in 2023, including boat slip rentals at McKinley Marina, golf courses and admissions at Boerner Botanical Gardens and Mitchell Park Horticultural Conservancy along with a few other facilities available for event rentals.

Despite the federal funds buoying its budget, the transit system has already been reducing service in anticipation of a looming budget deficit and struggles with staffing. This started with the ending rides to festivals and Freeway Flyers, services that don’t appear in the 2023 budget.

Crowley’s budget does propose an increase of $514,000 in property tax levy support for the department, filling in some revenue lost to years of declining ridership. This move is meant to “incrementally address a fiscal cliff for transit forecast for 2025,” Crowley said.

The county executive signaled his commitment to transit given the expectation that “future budgets will be challenging.”

“The role of transit is critical now and in the future,” said Crowley. “Ongoing investments in transit will help us realize a future where an individual’s race no longer predicts one’s success while also improving outcomes for everyone.”

Crowley’s budget proposal includes a $1.5 million increase in funding to the Milwaukee County Sheriff’s Office. These funds will largely be used to cover the cost of a $3 per hour wage increase implemented this year as the federal stimulus funds used to pay for it run out. The funds will also cover a change in vacation policy. The overtime budget was also increased by $361,192.

Four, vacant correction officer positions would be eliminated. The funding would be reallocated to create “eight to ten part-time positions that would be recruited from previous staff that are already certified and may not desire to work in a ‘full-time’ capacity,” according to his 2023 budget proposal.

In 2021, Crowley produced a strategic plan for Milwaukee County that outlined an overarching policy for the government to achieve racial equity and become the healthiest county in Wisconsin.

The plan calls for prioritizing “upstream” investments that address the root causes of inequity. The policy is intended to guide the budget of every department and the 2023 budget includes specific investments aimed at increasing diversity in the county workforce and in contracting.

More about the 2023 Milwaukee County Budget