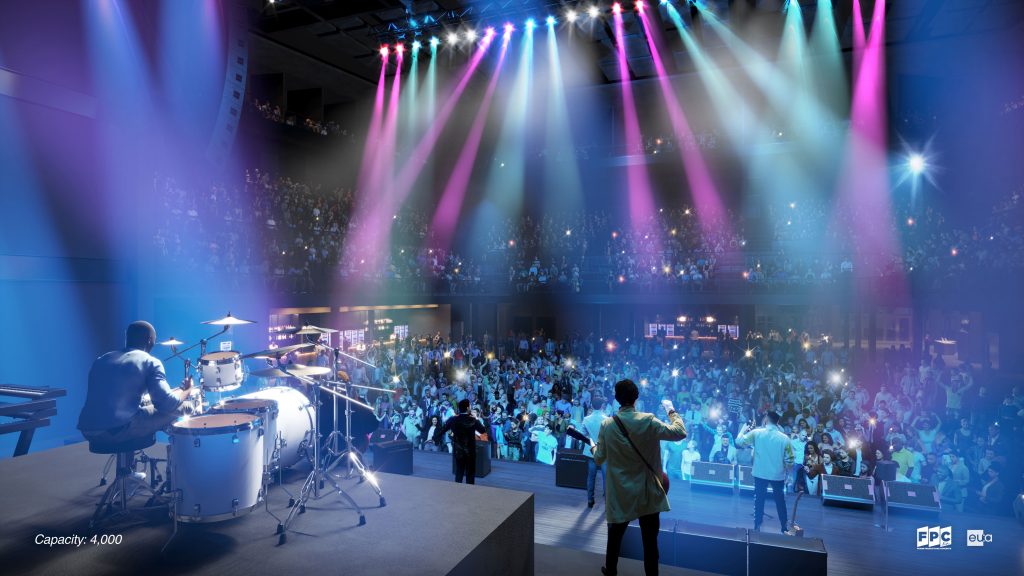 On Monday the city held its first hearing on a proposal by Frank Productions, Live Nation and the Milwaukee Bucks to develop two new concert venues with capacities of 800 and 4,000 people located across from Fiserv Forum, as Urban Milwaukee reported.

In essence this would bring in a monopolistic operation to run much of the concert business in Milwaukee. While Madison-based Frank Productions would own and operate the facilities through its FPC Live subsidiary, 51% of it is owned by Live Nation. And since Live Nation’s 2010 merger with Ticketmaster, it has become a “monopoly” which “has strangled competition in live entertainment ticketing and harmed consumers,” as members of the House of Representatives charged in a letter to President Joe Biden calling for a federal antitrust investigation.

What is the likely impact on Milwaukee? To understand the local concert scene you need to start with Summerfest’s huge impact. The festival books 60 to 100 bands a year, industry observers say, and those bands are unlikely to play some other venue in town that year. “When Summerfest comes out it looks like Milwaukee is a giant marketplace,” says Joe Balistreri, co-owner of The Rave/Eagles Club concert hall. “The reality is it leaves a lot less shows for the rest of us. That’s always depressed the market.”

Moreover, as a complaint filed with the IRS noted, Milwaukee World Festival, the parent company of Summerfest, requires performers to agree to contractual provisions to not perform elsewhere in the Milwaukee area for up to six months prior to Summerfest, which given the size of the Milwaukee market effectively means “any performer that MWF books is unlikely to play any other venue in Milwaukee that same year.” (Officials with Summerfest did not contest this when asked by Urban Milwaukee to comment.)

Balistreri and Adam Peterman, an independent promoter based in Green Bay who has frequently booked shows in Milwaukee, did an analysis of the total number of concerts booked by music venues of comparable size (800 to 4,000 capacity) as the proposed Deer District venues over the past year (July 29, 2021 to July 31, 2022) and came up with 388 shows. That includes 181 at The Rave/Eagles Club, 83 at the Riverside Theater, 74 at Turner Hall’s ballroom, 65 at the Pabst Theater, 24 at the Miller High Life Theatre, and 11 at Summerfest’s BMO Harris Pavilion. (This is down from prior to the pandemic but industry professionals aren’t sure if and when things will return to “normal.”)

Could they have booked more concerts? “We are all fighting for all the shows we can get,” Balistreri says.

“There are only so many bands on the road at any one time,” Peterman notes. They typically tour the country with a couple buses, and their gear, lighting and tech people, he notes. And you need to book them for a date in Milwaukee that fits within their schedule.

If that’s the approximate size of the current pie, the addition of two Deer District venues, seeking to book a reported 135 shows a year, would surely require Frank Productions to take business away from current operators. “They are going to cannibalize the other promoters,” Balistreri says.

But Frank Productions has argued that their new concert venues will grow the music pie in Milwaukee, bringing more acts to the city. “In cities across the country where new venues were added, where the styles and sizes are different, the result has been additive,” Joel Plant, CEO of Frank Productions, told Urban Milwaukee last January. But the sizes of the planned facilities are almost exactly the same as those owned by The Rave. And if they plan to add to the current scene, then why did Franks Production try to buy out The Rave and Eagles Ballroom complex before launching this effort to build new concert venues?

When asked by Urban Milwaukee back in January to name some bands that haven’t played Milwaukee, Plant could come up with just one, Sylvan Esso. But the group played two sold-out nights at the Pabst in 2018 and played the Pabst earlier in 2014 as part of a tour for its debut album. The group has a long history in Milwaukee, as its two members actually met at another Milwaukee venue, the Cactus Club.

Back before Frank Productions was taken over by Live Nation, its top executive, Charlie Goldstone, who now serves as FPC Live president, described the national behemoth this way “They (Live Nation) are called the Walmart of promoters because they basically built the business going into cities and either acquiring or downsizing local promoters like Frank Productions or simply running them out of business.”

In the process, the company makes decisions from a national perspective that may hurt the community of a facility it takes over. Thus after Live Nation took over Alpine Valley, once one of the top concert venues in the Midwest, its bookings began to shrink, down to zero in 2017. Many of the concerts it might once have booked were now at Live Nation’s four venues in Chicago.

“Live Nation basically swallowed up Madison’s live music scene, buying up nearly everyone there,” Peterman says. Plant, in his comments to the City Plan Commission, said this resulted in more concerts coming to Madison. Peterman contends there has been little or no increase in music acts coming to the city, but consumers now pay more because of how Ticketmaster and Live Nation use scalping to drive up prices, with Ticketmaster getting a cut of every ticket repurchase. Comedian John Oliver did a 20-minute take on how this works.

Get a daily rundown of the top stories on Urban Milwaukee
One thing that’s confused the question of the size of Milwaukee’s music market has been a switch in the strategy of Gary Witt, who programs the concerts at the Pabst and Riverside theaters and Turner Hall. Back when Frank Productions and FPC Live were proposing to build their concert venues near Summerfest, Witt was part of the group arguing that the new venues would cannibalize Milwaukee businesses. Now he argues there is plenty of room for expansion in Milwaukee’s music scene, telling reporter Piet Levy that Milwaukee can draw more from the huge Chicago metro area. (Witt said he didn’t have time to review the list of shows created by Balistreri and Peterman.)

But in that same story veteran promoter Doug Johnson said “Milwaukee is getting 80 to 90% of the talent that goes out on tour, so I don’t know where the extra shows are going to come from.”

Witt has to sell the idea of Milwaukee’s unlimited market, because in June he announced plans to build a new 3,500-capacity concert venue near 6th and Michigan in the Iron District. Industry professionals view this proposal as a bid to head off the FPC Live proposal. The likelihood of both being proposals being built and succeeding is nil, says longtime Shank Hall owner Peter Jest. “In the long run someone’s going to lose,” he told Urban Milwaukee.

Witt also cut a deal with the Wisconsin Center to take over management of the Miller High Life Theatre, the redeveloped auditorium building on 6th and Kilbourn. This was “about competing with FPC Live,” said Jest, to prevent FPC and Live Nation from using that facility to build a base in Milwaukee.

Witt has promised the Wisconsin Center he will increase the number of concerts at the Miller theater, which has long been seen as an underperformer, but Jest predicted Witt will switch some concerts he now books at the Riverside or Pabst, because there simply aren’t many bands that aren’t already coming to Milwaukee.

Radio Milwaukee DJ Tarik Moody, in comments to the Plan Commission, noted that he often goes to Chicago to see acts that don’t come to Milwaukee. (Moody did not get back to Urban Milwaukee, which requested an interview.) Peterman says there are bands with more of a cult following that can draw to smaller venues in Chicago, but wouldn’t draw enough in Milwaukee, a market one-sixth the size.

The fact that the Milwaukee Bucks are partnering with FPC Live adds a concern for Milwaukee taxpayers. There has yet to be a full accounting of the full subsidy for Fiserv Forum, which I’ve estimated could be as least triple the official price tag of $250 million. Now the team is helping build concert halls that industry professionals predict will be the most threatening to the Milwaukee High Life Theatre, a public facility supported by tax dollars. Any loss in its concert revenue is likely to made up by the taxpayers.

Second most threatened, insiders say, is the nonprofit Turner Hall, which gets about a third of its revenue from concerts booked there, according to executive director Emilio De Torre. But most concert promoters in town are likely to take a hit.

Ultimately it will be up to the Milwaukee Common Council whether to approve the Deer District project, but those decisions have rarely if ever been about a company’s market power. “While the monopolistic power argument is not one I’m immune to considering,” downtown Alderman Bob Bauman has said, he’s not sure “the city should be in the business of protecting incumbent businesses.”

And if the neighborhood’s alderman votes yes, a development proposal typically gets passed.