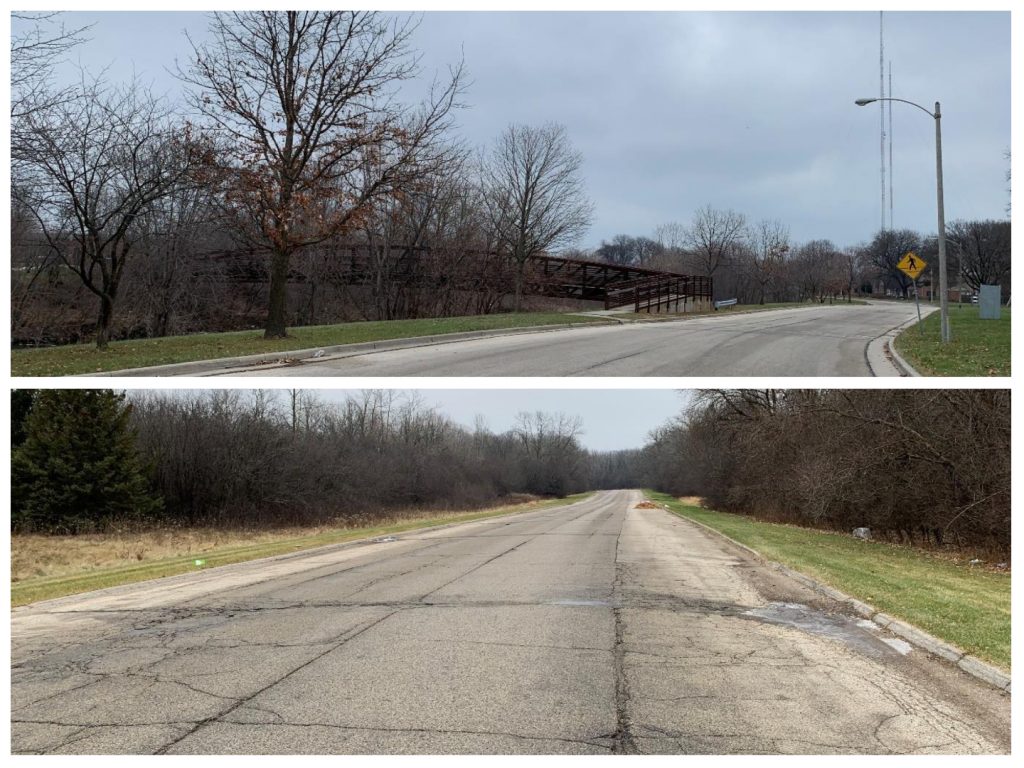 The Milwaukee County Parks Department is seeking to use COVID-19 stimulus funding to convert two sections of road to bicycle and pedestrian trails, and block thru-access to vehicles.

The project would use approximately $2.6 million in funding from the county’s American Rescue Plan Act allocation to convert nearly one mile of the Little Menomonee Parkway between W. Appleton Ave. and W. Leon Terrace; and approximately 0.3 of the Lincoln Creek Parkway from N. 23rd St. to N. 27th St.

The project came out of the county’s ARPA allocation process, specifically an initiative county officials have dubbed the “Fiscal Health Challenge,” wherein officials sought projects from around county government that would create efficiencies in operations or energy, save the county future costs, generate revenue or take a bite out of the county’s massive backlog of deferred maintenance.

The project hits several levers that should contribute to the department’s fiscal sustainability, according to parks officials. First, a roadway is more expensive to rebuild and maintain than bike and pedestrian trails. James Tarantino, interim deputy director of parks, recently told the county board’s Parks, Energy and Environment Committee that the Menomonee River Parkway in particular “is in terrible condition.”

“It’s a parkway that would otherwise be multi-multi-million dollars on our capital program to rebuild as a roadway.”

Both sections of parkway targeted for conversion will have no effect on car traffic, as they currently function as redundant roadway used as a “short cut” off the street grid that parks officials say encourages reckless driving. As a June 13 memo from Executive Director Guy Smith on the project notes, “Parks has received complaints and staff have directly witnessed excessive speeding on these parkway segments.”

Get a daily rundown of the top stories on Urban Milwaukee
The parkways also do not directly connect to parks recreational amenities. The Smith memo notes that similar conversions have been done in Greenfield and Underwood Parks.

The department sees the projects as an extension of the popular “Active Streets” program, which saw the City of Milwaukee and the county close off parkways and city streets to thru-traffic at the start of the COVID-19 pandemic.

In 2020, during the active streets program, the entire Little Menomonee Parkway was closed to vehicle traffic.

Cost estimates for design and construction of the new trails are $1.6 million for the Little Menomonee Parkway and $698,000 for the Lincoln Creek Parkway. Another $70,000 would pay for project management and community engagement for the projects.

Two county supervisors, Dyango Zerpa and Juan Miguel Martinez attempted to kill the trail conversion projects with an amendment when the $21.9 million package of 14 “Fiscal Health Challenge” projects initially went to the board.

Zerpa and Martinez argued that there are many parks throughout the county’s parks system — citing parks in neighborhoods that are majority Black or Latino — that are in dire need of funding. Zerpa said money spent on bike trails and golf courses, “just doesn’t meet the standards for racial equity when it comes to Milwaukee County.”

“We just feel it would be much better spent elsewhere,” Zerpa said.

The amendment also sought to strike a $6.9 million investment in irrigation systems and golf cart paths at six county golf courses. The parks department put forward this project and the ARPA Task Force approved it because, according to the parks department, the irrigation systems would save golf courses in bad condition, allow parks staff to spend less time hand watering golf courses; and the cart infrastructure would likely increase the amount of lucrative cart rentals the department can do during the season. More broadly, golf courses have become the number one revenue generator for the department’s operations. In 2020, an unseasonably warm fall meant the county saw golfers playing later into the season, which helped close a budget deficit that year in the parks department, with the department eventually ending the year with a surplus.

Martinez said he wanted the money to stay in the parks system, but instead wanted the funds to be invested in parks that “desperately need attention.”

Zerpa and Martinez introduced the amendment on the floor during the May 26 meeting of the county board, after the “Fiscal Health Challenge” package had been recommended for approval by both the county’s ARPA Task Force and the board’s Finance Committee. Martinez sits on the latter and voted in favor the first time around.

The amendment ultimately failed on a tie vote, with nine supervisors voting in favor and nine voting against. It was sent back to the board’s parks committee for further consideration. The committee unanimously recommended the package during its June meeting, and it will go before the board again this week.

One thought on “MKE County: Parks May Convert Roads to Bike, Pedestrian Trails”